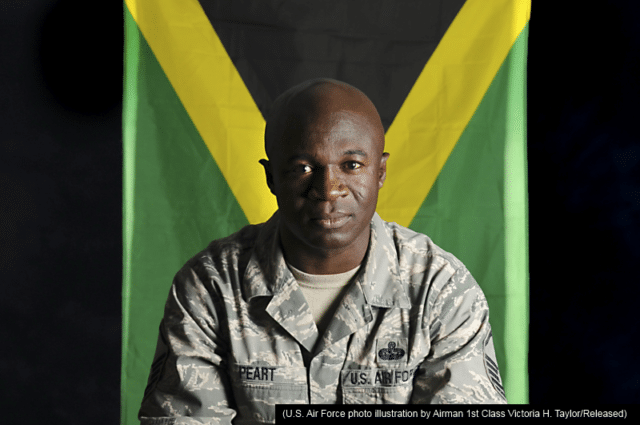 Growing up in Jamaica, U.S. Air Force Master Sgt. Kenry Peart and his family went without what the average American would consider necessities. His aunt’s house lacked running water, indoor plumbing and, at times, electricity. Without a washing machine, the family was forced to make trips to a local river to launder their clothing.

“We used an outhouse, and there was a small enclosed area outside where we took baths,” said Peart. “I remember having to walk far, sometimes without shoes, to get firewood for the wood-burning stove we would cook all our meals on.”

Peart’s family farmed fields and relied on each other to make ends meet.

“We grew bananas, pimentos and oranges year-round, and tended to goats and cattle to sell at the market,” said Peart. “Although it was a team effort, my great aunt was the main provider.”

Peart knew, even as a young boy, that his mother was working hard to provide for her children and that the time apart was necessary for her to build her family a better life. 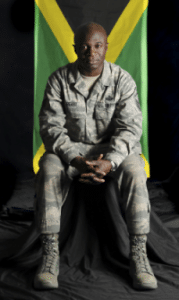 “Shoes and new clothing were a huge privilege to have growing up,” said Peart. “My mother would send packages on Christmas that were filled with clothes and little toys that she could afford. She would give her last penny to ensure we were taken care of.”

Once Peart’s mother finished school in Kingston, she moved to America and began working two jobs. She earned enough money to bring her children when Peart was 10 years old. He lived with his mother, stepfather and five siblings in a small home outside in Washington, D.C., while his mother worked cleaning houses and as a cook.

Peart said the cultural differences and lifestyle improvements were not the changes in his environment he remembered most.

“There was a language barrier that took me a year to overcome,” said Peart. “In Jamaica, we speak Patois, which is broken English that is very fast-paced. I knew English, but it was hard for me to adjust.”

Peart’s mother continued to work multiple jobs to support her family, but money was tight and new clothing was expensive.

“The biggest difficulty I faced when first coming to America was adapting to the social life. Unfortunately, kids can be mean,” said Peart. “I will never forget my first day of 5th grade. I was so excited when I showed up with a bright pink backpack, white sneakers with Velcro straps, a black and red plaid shirt and black slacks. I quickly realized how important color coordination is and what ‘masculine’ colors were.”

As Peart grew older, things became much easier. During his middle school years, he said he found his niche in school athletics.

“Social adjustment was tough, but I overcame that by playing sports,” said Peart. “I played just about everything: football, cross-country, track and basketball. Because of that, I was absorbed into the inner circles, and made friends. It no longer mattered what I wore or what I owned because I was an athlete.”

Once he became old enough to work, Peart was forced to leave behind the one thing that made school easier for him.

“‘I began working because I couldn’t just sit back and watch my mother work as hard as she did,” said Peart. “I knew what I had to do to support my family, even if it meant leaving behind high school sports.”

It was in high school that Peart met his first wife, Kandice Dickens, and learned about vocational school. He began taking classes in pursuit of an automotive certification. He married Dickens and began working for a repair shop as a mechanic. About a year after getting married, Dickens joined the Air Force.

“Joining the Air Force was always something that I wanted to do, but I was afraid to take the plunge,” said Peart. “Uncertainty and the fact that I had a steady job and was making good money helped me make the decision to continue as a mechanic.”

While traveling alongside his wife, Peart learned more about the military lifestyle and became more driven to join, but still lacked the push it took for him to raise his right hand and swear the oath.

“Kandice got pregnant with my daughter, and at that moment, I started to think about where I was in my life,” said Peart. “Automotive work was the only skill that I had, and if something were to happen to the point where I couldn’t work, I would have no way to support my growing family. It was then that I decided to join the Air Force.”

After joining in 1999, Peart said the adjustment to his new military lifestyle was an easy one that fit his “organized personality.” He served his first enlistment as a dental technician, then retrained into his current Air Force specialty. Although, in order for Peart to reenlist and continue his Air Force career, he needed to become an American citizen.

“Becoming an American after living in the country for so long was a life changing experience,” said Peart. “I remember being very emotional as I was being sworn in because I was finally a part of the country I promised to protect.”

Peart later divorced, was granted custody of his daughter, and married the woman he now considers his “soul-mate,” Latisha Brown. They continued to grow their family with the addition of their son. His children are growing up in America with the necessities that Peart once lived without, but he still recalls the conditions he grew up in.

“I still try to visit my great aunt in Jamaica every two years. Now that I am able, I support her as much as I can,” said Peart. “She still lives in the same house that she brought me and my sisters up in, and we make improvements to it continuously. We’ve made additions–indoor plumbing, a washing machine and a solar water heater. Her house is the talk of the town now.”

Looking back, Peart said that he is “very grateful” for everything his childhood had taught him and for the strong women in his life that helped him become the man he is today.

“My childhood molded me into the Airman I am today, and has had a profound impact on my Air Force career,” said Peart. “I endured a lot growing up and was fortunate to discover the magnitude of my inner strength early in life.”

Peart said because of his upbringing, he is better able to mentor and take care of the Airmen he works with.

“I’m confident I can mentor and guide Airmen through any challenge they may face while helping them to realize their inner strengths,” said Peart. “I love the Air Force because every Airman has a story to tell, and the most important part of leadership is simply getting to know that story.”

As Peart continues to grow as an Airman, he said he will always refer to his humble roots to keep him pressing ahead.

“The journey I took to where I am today is something I value greatly,” said Peart. “My family is stronger because of it, and I know I will be able to pass on some of the lessons I have learned to my children so that they will value the lifestyle they have today.”