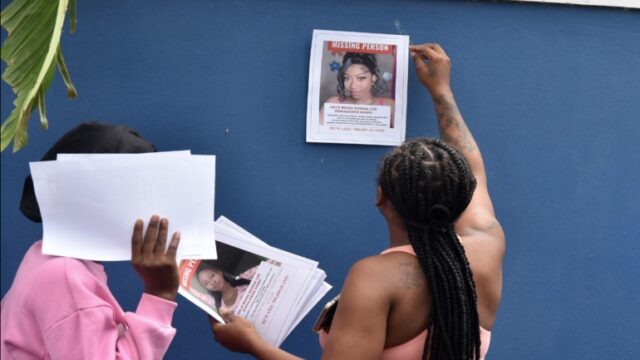 Sophia Ruffen, a Trinidadian living in the US, is offering a $5-million reward for information related to the disappearance of 24-year-old Donna-Lee Donaldson.

Ruffen, who has a five-year-old daughter, said Donaldson’s case appealed to her intimately since the news broke on July 13, the day she was reported missing by her mother, Sophia Lugg.

“It moved me to wanna offer a $5-million reward to anyone who can locate Donna-Lee or in regard to her disappearance. Too many women are going missing in Jamaica that is going unsolved. Donna-Lee has to be found, justice has to be served. Somebody knows something and when you put up a reward, money talks. Somebody is going to come forward and say something,” Ruffen declared.

Ruffen, 38, related that Donaldson’s case hits close to home, as she grew up in a country where incidents of kidnappings, and women and children going missing, are rife.

Just four days ago, the Trinidad and Tobago Guardian reported 13-year-old Marlin Blanco as missing. Ruffen explained to THE STAR that she felt compelled to offer a reward after falling in love with Donaldson’s aura when she was a former host of reality TV show 876 Roommates.

“She just seemed like a well-spoken person, a nice young lady. Why did that have to happen to her? I am in the position to offer, and that is what I am willing to do. It is my way of helping,” the entrepreneur said. Ruffen said she sympathises with Lugg and has found herself spending more time praying for her own child’s safety.

“I can’t sleep. I don’t know this young lady. I am watching the protest, and I wish I was in Jamaica; I would take a flight right now to show my support. Everybody is watching to see how this is going to unfold. This is sad, really sad. I know the mother is grieving, so she has to get some justice and some closure. I have to have closer conversations with my daughter because we are living in the last days,” she told the news team.

Ruffen stressed that the reward would only be paid to anyone whose information leads to an arrest, and that the funds are made available through her own finances and an overseas charity, Helping Hands.

Meanwhile, the police have assured all concerned parties that the investigation is being conducted according to the highest standards. In a release the police say the investigative team will this week hold a case review conference with the director of public prosecutions and senior members of her staff.