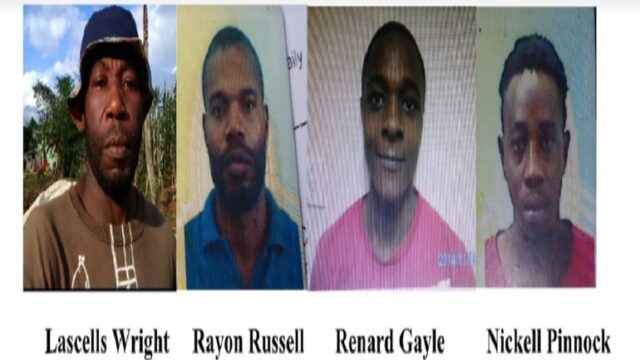 Detectives assigned to the Trelawny Police Division have listed four men as being the most wanted in the parish, and are urging them to turn themselves in by Monday, May 6.

Lascelles Wright, otherwise called ‘Byah’ or ‘Stella’, of Tyre district in Trelawny, who is wanted in relation to the murder of Jason Sinclair on January 22 in Tyre district.

Rayon Russell of Felicity Road in Montego Bay, St James, who is wanted in relation to the murder of Albert Mowatt on March 20 at Market Street in Trelawny.

Renard Gayle, otherwise called ‘CJ’, of Hague, Trelawny, who is wanted in relation to three counts of wounding with intent that were committed on April 28 at about 4:10 p.m. in Martha Brae, Trelawny.

Nickell Pinnock of West Road, Kingston 12, who is wanted in relation to the murder of Owen Green on March 28 in Kinloss district, Clarks Town in Trelawny.

Anyone knowing the whereabouts of any of the four men is being asked to contact the Falmouth police at 876-954-3271, the police 119 emergency number, or the nearest police station.

Additionally, members of the public are being reminded that it is an offence to harbour criminal elements and that doing so presents serious risks to their families and associates.