ilovejamaicans.com
Home News To Be Or Not To Be? – Kartel Still A Favourite Among... 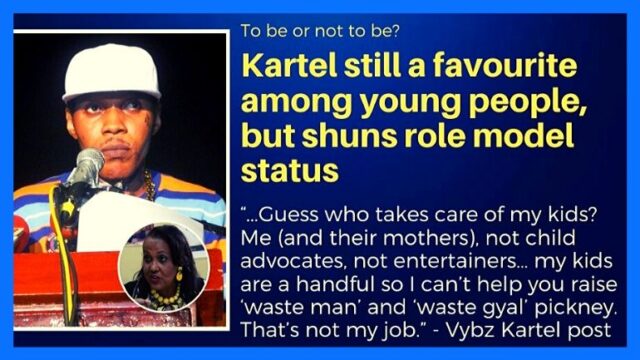 It has been an ongoing issue, where entertainers have been blamed for lyrical content that incites violence and lewd behaviour, especially among youngsters. And so, in the most recent controversy, incarcerated deejay Vybz Kartel, real name Adidja Palmer, has blasted Jamaica’s Children’s Advocate Diahann Gordon Harrison for her views in a Gleaner article published on January 27, 2020. Reference was also made to the article during TVJ’s Smile Jamaica, aired on January 29.

In the article, Gordon Harrison was quoted saying: “This is the person they (young people) saw as the be-all and end-all of what you need to strive to be like. If you stop and just dissect for a moment a cross section of the type of lyrics that are contained in Mr Palmer’s music, certainly as a parent, that’s not the kind of music my children would be exposed to – not if I have anything to do with it… . And so we have to ask ourselves the question, who are the role models that are setting the examples for our children?”

According to The Gleaner article, a study was conducted by the Office of the Children’s Advocate (OCA) among girls and boys who were either charged or accused formally of having committed an offence, which found Kartel to be the undisputed role model for children who were in conflict with the law.

However, in what appears to have been a response posted via Instagram on Kartel’s behalf, the deejay was not pleased that blame was once again being laid at his feet for his lyrical content and the negative impact it had on young people.

A part of the comment read: “…let me tell you somn, I’ve been in (location loading…) 9 years now and guess who takes care of my kids? Me (and their mothers), not child advocates, not entertainers… my kids are a handful so I can’t help you raise ‘waste man’ and ‘waste gyal’ pickney. That’s not my job.”

The statement continued: “It’s just a career for you people … write a few reports, do a few interviews, call out the hottest artiste at the time. In the ’90s it was Bounty and before it was Ninja and Shabba … artiste artiste, never the legacy of JLP and PNP Cold War Proxy Conflicts, that breed the subsequent gun culture … always the artiste … never the fault of known dons who recruit from among the most impressionable and vulnerable of us … never the don/politicians who openly run garrison communities … it’s always the artiste.”

Dr Donna Hope, professor and sociocultural analyst in the Institute of Caribbean Studies at The University of the West Indies, Mona campus, says she would love to get her hands on a copy of the OCA’s study/report, as she believes, “Vybz Kartel is still the most favourite artiste, regardless of whether you’re a child in trouble, or a child out of trouble … he’s a favourite among young people.”

She added: “Studies and research can be done in different ways. I’d love to see the study report, what they were searching for and what they were asking.”

According to Hope, “I did my own research around that discussion in 2009-2010 and Vybz Kartel at that time was the most favourite artiste among young people, both children who were in problems as well as children who were not. So he was the favourite artiste, full stop. Because we gave them a list of other people – role models, like teachers, pastors, parents … the different groupings who are a part of the socialisation networks in the country. The question we really asked was ‘who would you go to if you had a problem with that …, or where would you look for information about that … because we wanted to see who people considered to be important in terms of getting information about things that were bothering them, problems, etc.”

Pastors were found to be very low in the polls, but high up were teachers, and depending on what the context was, artistes were also important.

“One of the biggest things from that study, artistes came up as role models on how to be popular and how to get a career. A lot of young people are very attracted to careers in the music industry, because it looks not just sexy and popular, but also rich … people seem to get rich very easily … and young people tend to gravitate towards people who are popular,” Hope said.

Prior to his incarceration, Kartel, who was a ‘guest lecturer’ at The University of the West Indies (Mona) on March 11, 2011, told his audience that his music had always been at the centre of a lot of controversy over the years and declared, “My music is controversial, but so was reggae, which, interestingly, was labelled ‘rebel music’ back in the day … my life is my art, and my art is my life. Life is a colourless colouring book and we have all the crayons to make it as colourful as we want, by the choices we make and how we live our lives.”

He continued: “In my life, everything I do, from controversial lyrics, bleaching, etc., is precisely orchestrated and executed in a specific way, to achieve a desired result. So I am conscious of everything that I do, because I’ve decided to make my life pretty like a colouring book … I am not a social, religious or political leader, I’m an entertainer who does adult-oriented music. So I’m not here to preach my morality or lack of, I’m just here to do music to the best of my ability. That’s all. If you need morals, I suggest you go to the nearest church.”

However, Betty Ann Blaine, who is a child advocate and founder of Hear The Children’s Cry and Youth Opportunities Unlimited, said given Kartel’s current situation, now that he is behind bars, hopefully he would have had time to reflect, and maybe it is time he changed his tune.

“I’ve been watching this whole thing with Vybz Kartel over a long period of time. I know he has a lot of followers, I know a lot of the young people look up to him … and I really want to speak to Vybz Kartel through this conversation to say look, since you know that there are young people, teenagers, young adults who are so easily influenced, who look up to you as a role model, do the right thing. Whatever you put out, let it be wholesome. Already he’s serving time, he’s being punished for a crime, and what he should do is use his experience to help young people turn their lives around. Kartel, use that influence you have … use it to let young people better themselves … What we are calling on Kartel (and other entertainers) to be are positive role models.”

But one counterargument has been why look to artists as role models, when so many have run afoul of the law? Among them, Jah Cure for rape, Bounty Killer for domestic violence, Ninja Man for murder, Vybz Kartel for murder, Mavado for aggravated assault, Busy Signal and Buju Banton were held in the United States on drug-related charges, Elephant Man for tax evasion, and Zebra has been held on multiple rape charges.

Nevertheless, Hope remained hopeful, saying: “Bounty Killer is now an advocate against domestic violence… and there are a lot of artistes out there doing a lot of work and they are a part of the dancehall fraternity. So maybe if the OCA could provide the entertainers with a chance to work with some of the young people, that would be a good idea.”