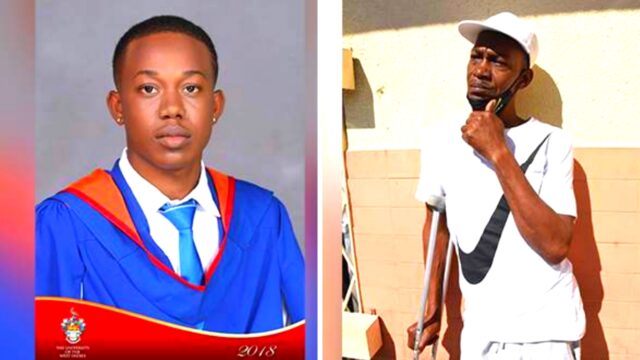 Today will be a difficult day for Radcliffe Campbell Sr.

The cop is forced to mark an anniversary he wishes did not exist. It is now a year since his 24-year-old son, Radcliffe Campbell Jr, has been missing.

“It is coming around to the time when this whole thing happen so it a put on a lot of stress, trust me,” he told the Jamaica Observer last week.

“This thing hit me so hard that [it] even deteriorate my health certain way. Mi wake up one morning with my left foot crippled and I know that it is the stress that I put on myself. I’m barely recovering right now,” said the distraught father.

Campbell Jr was reportedly last seen by his mother, Antoinette Taylor-Campbell, at Parkington Plaza in Half-Way-Tree, St Andrew. He is said to have parted ways with her after receiving a phone call, saying he was on his way to Glengoffe, St Catherine, where he lives with his father.

Investigators have a slim lead in the case. They were able to locate one of the missing man’s mobile phones.

“One of his phones was found in Portmore, but we haven’t gotten much from it so far. The person from Portmore said they bought it from somebody, so I am not sure how it ended up there. They are checking out some stuff in it, though, to see what they can get,” said Campbell Sr.

On the last day he was seen, Campbell Jr was dressed in a blue shirt with white markings on it, paired with blue jogging pants and black loafers.

As a member of the Jamaica Constabulary Force, Campbell Sr is well aware that once two weeks have passed, the search for missing people does not usually end well.

“Quite a few missing people are being investigated and mi know the results when people are missing for a certain time, so I wasn’t looking for anything after the first two weeks. I don’t have any hope that he is alive again. Because the torment and pressure that he would have been under, wherever they took him, I don’t think he would make it through, and he wouldn’t just leave on his own free will,” he told the Observer.

It is only in his dreams that he is now able to see his son, something he had never imagined happening.

“Mi dream see him couple of times but mi a wonder if is because I keep thinking about him so much. Mi remember mi dream see him come home with this grey hair and him a tell me that he is alright, but that was the last. Couple other times is like nightmare because is like him come into the house and we a walk and end up into the living room before mi realise that mi awake,” said Campbell Sr.

The father is struggling to understand why someone would harm his son. He told the Observer that his boy was employed at a law firm as an auditor and had many plans for his future.

“He was not mix up in no criminal activities because he had a good job and him never grow up that way to be red eye. Unless somebody draw him into some things that he is not aware of, because that can happen where you end up in the wrong crowd and not know,” he lamented. “But this really mash me up. I don’t know when I will ever be fine.”

He is hoping police investigators will be able to provide answers.

“Mi need more to be done and more can be done to get more information,” said Campbell Sr.