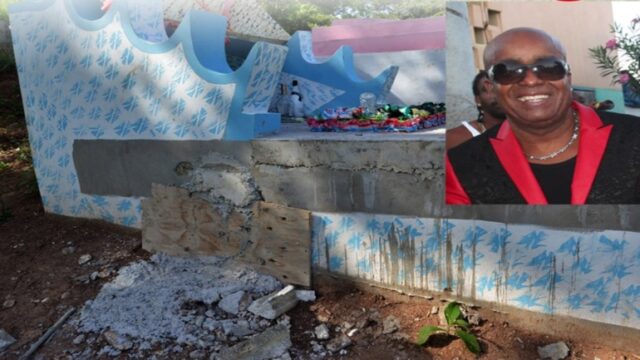 During his lifetime, Owen ‘Fada Fowl’ Clarke was virtually untouchable. The former British Link-up boss wielded tremendous influence and power, and demanded maximum respect until the day he was murdered in Kencot, Kingston 5.

He was given a lavish funeral, in a send-off fit for a king, which is perhaps why criminal/s broke into his grave and allegedly stole valuables.

THE STAR was told that two bottles of Hennessy as well as jewellery were taken from the grave.

Roy Fowl, as he was also called, was buried in a cemetery in the rural community of Pear Tree in north east St Catherine on March 25. Last week, persons recognised that a hole was in the grave and informed family members.

“When me come me see him hand hang out a the coffin and you can see the hand part dirty like them take off something off his wrist. You can even see the footprint pan the wall where they had their foot to support them,” a resident of Pear Tree told THE STARyesterday.

The man said he heard that Fada Fowl was buried with a gold chain around his neck and a seemingly expensive watch on his hand.

When the news team visited the grave, the freshly redone work on the blue and white sepulchre told the story that something odd had taken place.

One man told THE STAR that the incident which happened last week was quickly handled by the family. He said that the day someone discovered the open grave, they sprang into action to reseal it.

Family members of the popular dancehall promoter are very upset and perturbed as to why someone would want to desecrate his grave.

“Dem lick out the concrete and jump go dung inna the grave and tek what they want to tek out,” one of the men who patched up Fada fowl’s grave told THE STAR yesterday.

DIED ALL OVER AGAIN

When the news team contacted the Riversdale Police Station, close to the community, they said they were not aware of such an incident.

Meanwhile, one of Fada Fowl’s sisters was near to tears when she spoke to the news team.

“When I heard what happened, it was like he died all over again. I don’t even know why they would want to do something like this,” she said.

The sister said that the family is worrying about Fada Fowl’s 98-year-old mother hearing about the incident as she has not been well since his death.

“My mother listen to every news, so we not even want her to know this happen because she was a woman who never trouble with pressure, and after he died, she get sick. So we just worrying about her right now,” she said.

Another of Fada Fowl’s relatives said that he is upset and saddened by this event. He told THE STAR that as far as he knows, his uncle was not buried with any form of jewellery or money, and is disappointed that people would disturb his uncle’s rest in this way