ilovejamaicans.com
Home News She’s only 19 – and just made tremendous saves as Jamaica’s goalie...

(CNN)No one expected Jamaica to beat or even tie Brazil in their opening Women’s World Cup game Sunday. After all, Brazil is one of the best teams in the world.

But while Brazil won 3-0, it was Jamaica’s goalie — in her first World Cup appearance — who helped keep her team’s hopes alive, making an incredible penalty save at one point in the match.

What’s more, Sydney Schneider is only 19, still attending college, and didn’t even start playing goalie until a few years ago. 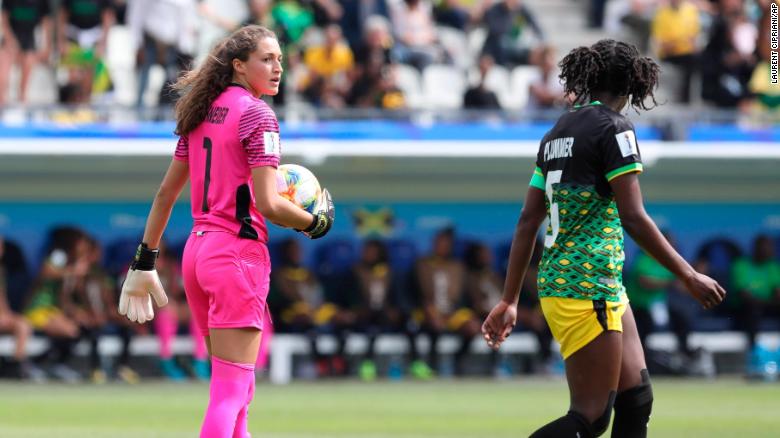 It’s not a bad first impression on the world stage.
Schneider even caught the eye of Jamaican sprinter and Olympic gold medalist Usain Bolt, who sent out a tweet applauding the goalkeeper.

Here’s what we know about Schneider.

She started late. Most professional goalkeepers begin training young. But Schneider didn’t start until she was well into her teens.

“I started when I was 14 or 15, and we were at a tournament and the coach threw me in the goal probably because of my height and I ended up being pretty decent at it,” Schneider told the Jamaica Observer.

She was clearly more than “pretty decent” — Schneider went on to play in Elite Clubs National League at age 16. Within three years, she earned a spot on the senior team and played for Jamaica’s youth national teams.

She’s still in college. Schneider just wrapped up her junior year at the University of North Carolina Wilmington, where she’s studying exercise science.

Although she initially wasn’t even sure if she was good enough to play at the collegiate level, the 5-foot-10-inch player started all 19 games as a college freshman. She is only the second goalkeeper in the school’s history to play every second in a season, according to her school profile.

She ranked No. 4 in the Colonial Athletic Association with a 1.13 goals against average and stopped 74.1% of the shots she faced.

She’s from Dayton, New Jersey. Schneider’s grandparents on her mother’s side were born in Jamaica. Her dad, who coaches soccer, is German.

She’s part of a history-making team. Known as the “Reggae Girlz,” the women’s Jamaica National Team is the first team from a Caribbean nation to qualify for a Women’s World Cup.

Schneider rejected her first offer to play for Jamaica in 2015, the Jamaica Observer reported. At the time, she wanted to focus on enrolling in college.

In 2016, she accepted a second offer to represent Jamaica during the Confederation of North, Central American and Caribbean Association Football (CONCACAF) Under-17 Championship in Grenada.

She was named player of the match last year. Despite her young age, Schneider was selected to play for Jamaica during the 2018 CONCACAF Women’s Championship. At the tournament, Schneider made an epic six saves to help Jamaica notch an upsetting 1-0 win over one of the tournament favorites, Costa Rica.