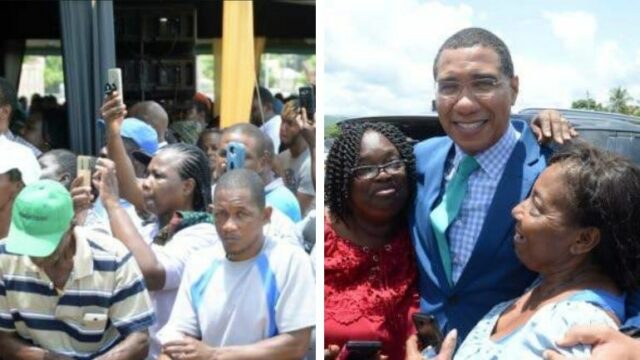 News that two of the top international fast food franchises operating in Jamaica, Burger King, and KFC, could set up shop in the planned Morant Bay Urban Centre, received the loudest cheers from several of the residents of St Thomas who had traveled to the old Goodyear factory for the groundbreaking on Wednesday.

St Thomas is one of, if not the only parish in Jamaica, to not have an outlet operated by Restaurant Associates Limited (Burger King) or Restaurants of Jamaica (KFC), and the residents were overjoyed to hear that this could change when the urban centre opens in a planned two years.

Managing director of Restaurants of Jamaica, Mark Myers, has already confirmed that with the opening of the urban centre KFC would finally be heading to St Thomas.

“For the people of St Thomas, we have been a little long in coming. We have looked on a number of occasions but the timing just wasn’t right. With this groundbreaking here today, hopefully once it is completed, we have requested space and I think they are going to be granting us this space so we look forward to providing our excellent, quality product and service to St Thomas,” Myers told the Jamaica Observer.

According to Myers, he was not surprised to hear the cheers from the residents when they heard that KFC could be coming their way.

“We have a product that is well loved, it has a connection with the people of Jamaica for a very long time, so we fit into the society and fit into the occasions where they are relaxing with family and friends,” added Myers.

In addressing the groundbreaking ceremony Prime Minister Andrew Holness argued that the absence of the two big players in the local fast food sector was seen as a sign of the lack of development in St Thomas.

According to Holness, this was one of the issues raised by a resident of St Thomas during a meeting held in Morant Bay in the lead-up to the 2016 General Election.

“At that meeting … somebody in the audience said, ‘You know that every other town has a Kentucky Fried Chicken’. Well, I’m not here to promote any brand, but I’m using that to make the point that people have certain markers for development and modernity,” said Holness.

“Essentially, what the person was asking was when will the services, amenities, and facilities that are available in other developed areas be available here? This development will give the opportunity for enterprising business persons, and I would say to the business community, get in right now, get in before the buildings are built.

“We are going to have banks that have already come on board, supermarkets, and food chains which have expressed interest, utility companies and along with the roads, we will be putting in pipes to improve water as well.

“The telecommunications companies have already indicated that they are going to be making significant investments in putting the cables underground to carry your Wi-Fi and Internet connections to improve them in the parish,” added Holness.

When completed the Morant Bay Urban Centre project will have rentable building space of 365,000 square feet. It is slated to house the St Thomas Municipal Council, St Thomas Parish Court, Tax Administration (Revenue Centre), an office of the Passport Immigration and Citizenship Agency, and a branch of the National Insurance Fund.

These State agencies will account for approximately 40 per cent of the available rental commercial space with the other 60 per cent being made available to other government agencies and private sector investors for rental.