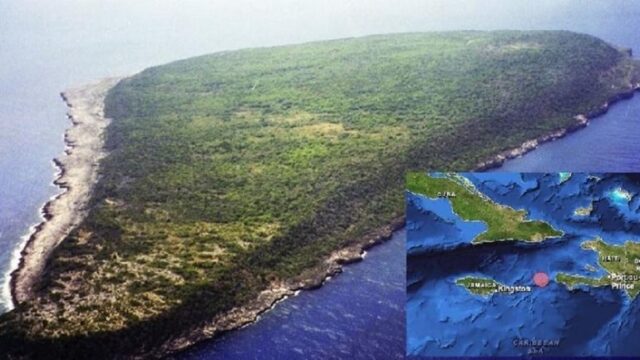 Did you know that there is an uninhabited Island that lies between Haiti, Jamaica, and Cuba, in the Jamaica Channel?

Probably not, but there is, and the island is known as Navassa Island, which is said to be about the size of New York City’s Central Park.

Given that the Island is relatively unknown to most, it may come as a surprise that its recorded history dates back to Columbus’ time. And it isn’t a dull history either, it has a vibrant history, which includes an ongoing territorial battle between Haiti and the US; it was also the site of an 1889 rebellion of African Americans.

Here are 21 interesting things to know about the Island. Please note that access to this Island is heavily restricted, those wanting to visit Navassa Island require a special-use permit that must be issued by the U.S. Military or the U.S. Fish and Wildlife Services.

1. Navassa Island is a pear-shaped piece of land; limestone, corals and a bit of grass are present there.

2. Navassa Island was first recorded in history when, Christopher Columbus was stranded in Jamaica during his fourth voyage. Columbus sent some of his crew members to Hispaniola (now Haiti and Dominican Republic) to seek assistance, it is said that while on their way there they saw Navassa Island.They called it “Navaza” derived from “nava” meaning plain or field.

3. For about 350 years after Columbus’ voyage, the Island was not heard of again; until 1801 when the Haiti claimed sovereignty over the Island, by way of the country’s constitution.

4. Americans also claim sovereignty of the Island; citing Peter Duncan, a sea captain, who in 1857 claimed the Island as belonging to the United States, by way of the Guano Act.

5. Haiti protested the annexation of Navassa Island, but the U.S. rejected the Haitian claim.

6. Given that the Island was uninhabited for large parts of its recorded history, it was saturated with the excrement of seabirds, which later formed Guano phosphate which was deemed a “superior organic fertilizer that became a mainstay of American agriculture”.

7. An American guano businessman living in Jamaica began selling the guano phosphate found on Navassa Island to the Navassa Phosphate Company of Baltimore.

8. The Baltimore company established settlements on the Island, for the purpose of mining in 1865, bringing 140 African Americans to the Island as contract laborers were they set up barrack housing for the blacks as well as houses for their white supervisors.

9. Poor working conditions on the Island for African Americans resulted in a rebellion in 1889, in which five white supervisors died.  18 black men were charged with the murders. The case was brought to the U.S. Supreme Court in October 1890 (Jones v. the United States) where the men were found guilty and sentenced to execution.

11. Navassa Island was abandoned again, until the opening of the Panama Canal.

12. In 1913, the U.S. Congress provided funds to build a lighthouse on Navassa to safeguard the Island due to an increased number of ships passing the area following the opening of the Panama Canal.

15. There have been several scientific explorations to the Island by US universities

16. There is also a private claim on the Island by, Californian businessman Bill Warren, who expressed an interest in the Island in 1996.

17. Although the Island is uninhabited, Haitian fishermen and others camp out on the Island.

18. There is no airstrip on the Navassa Island.

19. The Island has no harbours.

20. Navassa Island has an unofficial flag, which was first hoisted on 7 December 2001. The flag was designed by Mr. Harry Wheeler.

21. The Island has eight endemic species of reptiles, four of these prominent species are now classified as extinct.