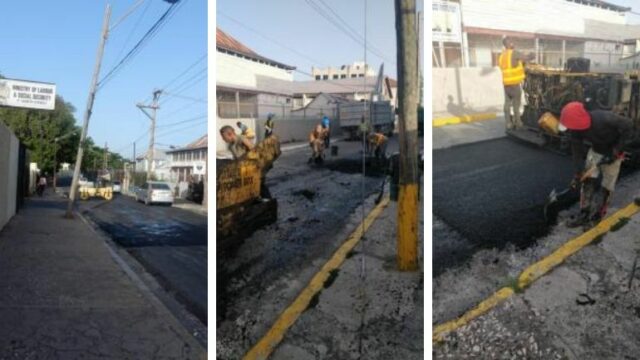 Roadworks are underway along North Street and Wildman Street as the nation prepares to say goodbye to former Prime Minister Edward Seaga this Sunday.

The funeral will be held at the Holy Trinity Cathedral, and the general area, including North Street and roads leading off, will get their fair share of camera time as the media covers the procession.

But as welcome as the roadwork is, some residents in the Wildman Street area are not pleased with the sudden need to fix the roads, a call that fell on deaf ears for a long time.

“You see how dem a fix up road fi dead man? A because dem ‘god’ dead mek you see dem a come fix up road now. Look how many places a fix up now because him a go pass it fi go a the church (Holy Trinity) and fi go a him burial grung. When wi a call fi the road fi fix fi years nobody never did a pay wi mind. But now dem big man dead, dem start roadwork,” said one angry resident.

One man, Mark, who operates his business along Wildman Street, said that he has been selling fruits and snacks in the same location for the past 20 years.

He said that as far back as he can remember, the road has been in a deplorable state and whenever they came to fix it, work was always done on one section, while the other was left unattended.

Cashie, who stood by watching the roadwork being done, said that she was not pleased that the Government thought it was a good time to fix the road.

She said that for years the road has needed attention and the authorities had not done anything. She insists that unless someone with high social standing passes by ‘ghetto’ areas, they will not get any attention.

“A only when people a come from foreign and people inna high position dead dem fix up road. Him nah see seh the road fix,” Ricardo Waysome said, adding that he has been working in the area for two years and has seen no repairs being done.

“A wi the taxpayers dem fi a fix the roads for because at the end of the day, a wi a go use it. Dead man can’t use the road,” Cashie added.