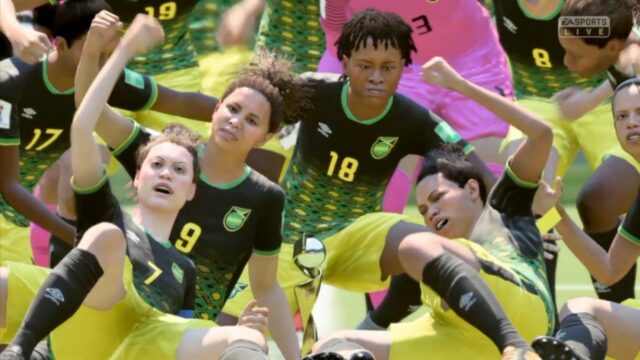 Jamaica Football Federation (JFF) director of marketing and business development, Sophia Harris-Lau, says the Reggae Girlz’s being added to the popular FIFA 19 video game will go a far way in raising the profile of not only that team, but also their male counterparts.

The Reggae Girlz were added on Wednesday by developers Electronic Arts (EA) Sports, in its update of FIFA 19, to facilitate its Women’s World Cup tournament section of the game, along with other participating nations in the real-life tournament to make up the full complement of 24 for gamers. Harris-Lau said the JFF had been in negotiation with EA Sports since 2018, to make it possible.

“We were approached by EA Sports for a licensing agreement to place the Reggae Girlz on FIFA 19,” she said. “We were advised that all the other nations participating in the Women’s World Cup had signed on. There was a lengthy negotiation process and we finalized recently, and we’re very pleased to know that FIFA wanted the Reggae Girlz brand as part of its platform. We think it’s phenomenal. I believe it is the direction that all sports are taking, where if you’re not part of a digital or electronic platform, you’re not moving with the global trend. So we’re very pleased to be part of this global phenomenon, pleased to have partnered with EA Sports and pleased that the Reggae Girlz brand, and the Reggae Boyz brand, by association, is going to see a significantly multiplied global exposure.”

With the Reggae Girlz making their debut in the Women’s World Cup against Brazil on June 9, STAR Sports had a game between the two teams on the PlayStation 4 console. The Reggae Girlz were given a rating of 67 for Attack, 69 for Midfield and 72 for Defence and the players listed on the roster were all accurately named. There were, however, a number of notable absences, including star player Khadija ‘Bunny’ Shaw, captain Konya Plummer, full back Deneisha Blackwood and goalkeeper Sydney Schneider, among others. There were also some Reggae Girlz in the game who were not named in the real life 23-member squad for the tournament. Harris-Lau said that she hopes that the next update released by EA Sports will correct this to give a more accurate representation of the team.

“We have no idea what players they have put up there,” she said. “The licensing is a blanket one for the team. I don’t know what criteria they used to select the players though. Maybe they encountered some issues, but we haven’t been advised of anything like that.”

The Reggae Girlz had mixed reactions to seeing their likenesses in the game and expressed their feelings via Instagram stories. While midfielder Chinyelu Asher and full back Lauren Silver were happy with their addition, center back Allyson Swaby had a hearty laugh about her appearance, which she felt looks nothing like her. It was also without her signature lavender headband.

The match itself ended in a 1-1 between The Female Canaries and the Reggae Girlz. Jamaica controlled possession for most of the game, even hitting the post in both halves. They got their goal when midfielder Marlo Sweatman headed in from a corner kick in the 57th minute, but Debinha equalized four minutes later when her powerful shot from the edge of the box beat goalkeeper Nicole McClure, going in off the post. If the game is anything to go by, the Reggae Girlz should feel well placed for advancement from Group C in the real competition.

Jamaica had not been represented in the FIFA franchise since FIFA World Cup 2006 when the Reggae Boyz were one of the listed international teams.

WATCH THE VIDEO BELOW