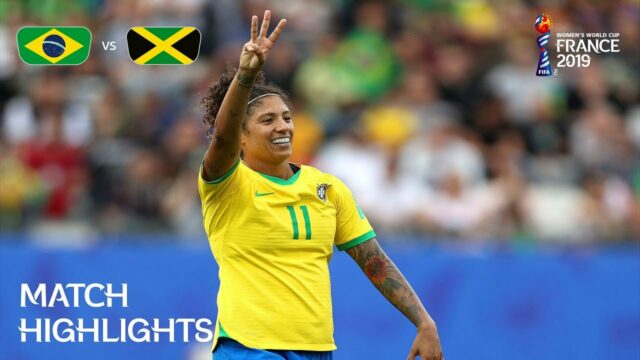 The reggae girls had to settle for a 3 love defeat to tournament favorites Brazil despite looking very good in the first half of the match, Jamaica created numerous chances but was unable to find the Brazilians Net.

Jamaica’s Goalkeeper Sydney Schneider did exceptionally well saving a penalty kick and stopping countless shots “Brazil could easily be 5-0 up if it wasn’t for the keeper” states the commentator at one point in the match. Jamaica lost to Brazil 5-0 back in 2007.

Brazil dominated the second half and Jamaica was unable to get a foothold on the ball as they did in the first half. Shaw looked great going forward however, unfortunately, she did not get the support she deserved from fellow attackers.

Brazil’s number 11 Christiane Rozeira scored 3 goals, 1st in the 15th, second in the 50th and third in the 64th minute, it must also be noted that Brazilian football legend Marta did not play a minute of the match as she is seemingly being rested for future matches.

The last time Brazil conceded a goal in world cup group match was way back in 2003 in a 1-1 draw between New Zealand.

Jamaica Reggae girls will next tackle Italy then Australia in their final group game.

Australia beats Italy 2-1 in the other match of the group played today.