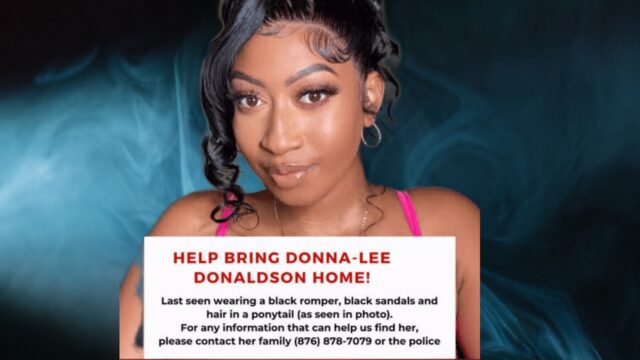 Maitland is assigned to the division and is reportedly a part of a love triangle involving Donaldson and a policewoman who has a child for him.

When asked by the Jamaica Observer to explain the reasons for the decision to restrict the policeman to desk duties, SSP Fletcher said, “I cannot absolutely say. I work with instructions, and based on the directives I received from my superiors he was removed from front line duties. The true rationale, I am not able to speak to unless I am going to make an assumption. The directive came and he was reassigned. He is on desk duties only, no operational duties.”

The policewoman was also removed from front line duties, according to her attorney Oswest Senior-Smith.

Donaldson was last seen on July 11 at an apartment at Chelsea Manor complex in New Kingston, St Andrew. The apartment is believed to be occupied by Maitland.

On Tuesday, Senior-Smith confirmed that his client still has her job but has been placed in a position in which she cannot immediately engage the public in an “operational way”. He appealed to the public to allow the official investigations to take course.

“My instructions remain that we have nothing to be overly distressed or concerned about. My client was served on Monday with correspondence from a senior officer requiring her to be removed from front line duties, so that is where we are at this stage. In the meantime, we are looking forward to next Wednesday when we will be subjected to an interview process at the Independent Commission of Investigations headquarters.

“I certainly can understand and also empathise with the great attention and focus that is being placed on the situation as it unfolds daily. But, at the same time, I could only ask, as an attorney, not only for my client, but whoever is being accused, that the public, notwithstanding the level of emotions involved in all of this, that they allow the investigations to take place.

“There is no substitute for painstaking and meticulous investigations by the JCF. We are expecting that they will go about their job in a professional manner and we are encouraged by the fact that they will be seeking the advice of the Office of the Director of Public Prosecutions and then we will see where the investigation goes,” said the lawyer.

Donaldson’s disappearance has sparked outrage from the public and has been the cause of persistent protests in the streets.

Maitland’s attorney, Christopher Townsend, meanwhile, has expressed concern that his client is being tried in the court of public opinion.

Several people on social media have severely criticised the police force for what they claim is the slow pace of its investigations into the mysterious disappearance of Donaldson.