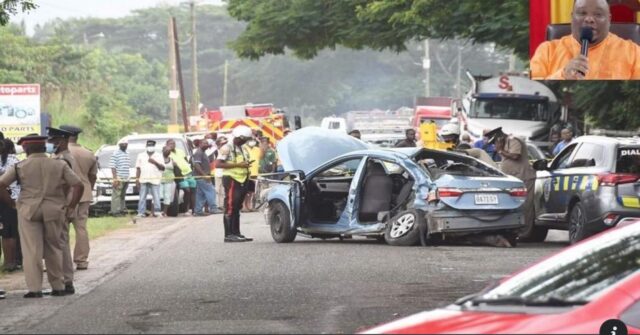 Smith died in a motor vehicle accident along the Bog Walk bypass in St Catherine on Monday morning while being transported by the police. A policeman also died while two other cops were critically injured in the incident which occurred about 9:30.

“What we know is that the two suspects involved in the double murder investigation in St James were being taken to Kingston in two vehicles and being escorted by police officers. One vehicle was the pilot and the other vehicle was behind and the vehicle that was behind, based on the account given by the pilot vehicle, there was a crashing sound and they realised that the vehicle overturned,” Head of the Jamaica Constabulary Force (JCF) Corporate Communications Unit (CCU), Senior Superintendent of Police (SSP) Stephanie Lindsay told OBSERVER ONLINE.

“We are not sure exactly what transpired. What we know is that from the vehicle that was overturned, there were four people that were seriously injured and two of them succumbed to their injuries,” she added.

Police sources tell OBSERVER ONLINE that Smith was being taken to Kingston reportedly because of the behaviour of police personnel at the location where he was being held in Montego Bay. The rank and name of the deceased policeman have not been released as yet.

Residents of Linstead who visited the crash scene told OBSERVER ONLINE that the now-deceased pastor was seen wearing a blue mask, lying beside the dead policeman. They said the car transporting Smith collided with another vehicle.

Smith was detained two Sundays ago after police went to his church where human sacrifices were reportedly being held. A shoot-out reportedly occurred between police and some churchgoers. It is reported that at least one person’s throat was slashed with a knife at the church.