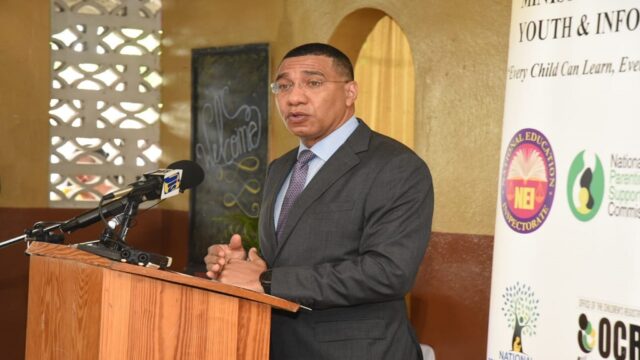 The programme, which was established in 2018 by Holness as a component of the Housing, Opportunity, Production and Employment (HOPE) programme, is aimed at improving the housing conditions of the poor and disadvantaged in the country.

In addressing the handing-over ceremony of a house under the NSHP in Post Road, Woodhall, Clarendon on Wednesday, Holness said more persons in need should benefit from the programme.

“We ask the MPs to go around and do a preliminary identification, and we are really hoping that the MPs don’t act in a political way that if the matters come to their attention, we really should look at the worst of the worst and recommend them,” he urged.

According to him, the MPs are not responsible for making the final determination in those who are selected to receive a house.

“So the MPs will gather five names per year – some of them even send in 20 names – and they leave it up now to a committee of technical experts in the Ministry of Economic Growth and Job Creation in the housing department that go through them to make sure that the established criteria for benefits that are set, are met.

“Once that is the case, we send out field officers to come and look. They investigate, they go to other members of the committee, ask and find out about the land,” Holness outlined.

Meanwhile, the prime minister noted that under the upcoming national census, more information will be ascertained on housing conditions of Jamaicans. This, he said, will help the Government with better fiscal planning.

“In the census they usually take up information on housing. I am going to ask them specifically to look at persons whose housing would be below that we would consider a minimum standard, so that we get an idea of what the budget should be to help the most vulnerable in the society,” he stated.

“My feeling is not statistically proven, but based upon all that I’ve seen, there could be as many as 10,000 households in Jamaica that would be in need of some type of social housing intervention.

“It may not be a full house. It could be the provision of land so they could build on it… Some people may need short-term rental in transition (to owning a house), and then the bulk would need this type of intervention,” Holness informed.

He noted too, that the social housing intervention is not only for single families, as the Government is also using the NSHP to intervene in what is referred to as “big yards or tenement yards, where the situation is a little more difficult”.

As at Wednesday, July 20, a total of 75 housing units had been completed under the NSHP, benefitting over 379 individuals across 37 constituencies.

Currently, there are 75 active construction projects in 31 constituencies. It is expected that all the projects will be completed by the end of this financial year (2022-2023).

Additionally, 177 units are expected to commence within this financial year.