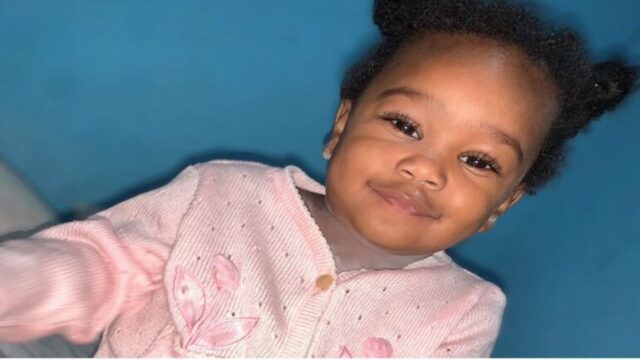 It is the earnest desire of Kimesha Higgins that her one-year-old daughter receives surgery to remove a fast-growing brain tumour that has been the cause of seizures for the past year.

Her baby, Leandra Palmer, was only seven months old when she was diagnosed with a right temporal mass in her brain last January. Higgins said that she had just got out of a taxi to take the child to daycare when the seizure appeared for the first time.

“I realised that she was very stiff. So, when I look at her now, I see that her hands were drawn up to her body, looking very stiff. She’s light-skinned but she looked very pale, her lips were literally blue and she was just there stiff. Afterwards, she became very limp and it was as if her breath had left her body, it was like she just dead in my hand, per-se. I cried out and people came to help me to the hospital,” Higgins recalled.

The 23-year-old recounted that she visited the Cornwall Regional Hospital, where a CT scan was conducted. However, doctors said that no anomalies were shown in the scans and discharged the toddler.

Moved by mother’s intuition, Higgins persuaded the doctors to keep the child for observation. That night the child had another seizure, which was witnessed by a nurse. It was then that an MRI, which is a more detailed investigation, was done and it was found that the child had a right temporal lobe glioma.

“I felt like the world was going to end because they said that the only thing that could save her was to do a surgery, and that’s when they transferred her to Bustamante [Hospital for Children] in Kingston. At that time, about February 2021, Bustamante said that due to the COVID-19, they couldn’t do the surgery because they’re only doing emergency. So, I asked them if this [her daughter’s condition] wasn’t an emergency and they said ‘no’,” the single mother told the newsteam.

Instead, Palmer was prescribed medication that would assist in managing the seizures. However, with her child experiencing up to five seizures a day, Higgins in worried.

“The other day I cried so till my entire face was swollen. A week ago, I brought her to St Ann’s Bay Hospital and they changed the medication because they said that one is too weak, so they changed it to a more advanced one, and I gave it to her but she’s still having seizures. She had one today [on Friday]. It’s very, very heart-breaking,” she added, in-between tears.

Higgins said that the doctors at Bustamante told her that baby Leandra is on a waiting list and advised her to seek medical attention overseas. She was recommended to the Semmes-Murphey Clinic through the Le Bonheur Children’s Hospital in Tennessee, United States of America. The projected cost is US$30,000 (approximately J$4.6 million), which includes completing the surgery, airfare and accommodation.

Higgins said that she lost her job as a cosmetologist due to the fact that she has to be caring for her daughter around the clock. In addition to being strapped for cash, the struggling mother has to find $32,000 every three months to pay for a MRI in order for doctors to track the growth of the tumour. However, the one that was due to be done in January has not been done because of a lack of funds.

In addition to being unable to come up with the funds needed, Higgins said that neither she nor her daughter has the requisite travel documents. She is appealing for helping from the United States Embassy to give her a near date for an emergency medical visa interview, so that her daughter can receive surgery at the earliest possible date.

She has penned a letter to the minister of health and wellness, Dr Christopher Tufton, and created a GoFundMe campaign to get help for her daughter. Less than US$1,000 of the targeted US$30,000 has been raised as of yesterday.

“Like any other child, she deserves the opportunity to grow up. I want to see her grow and become somebody successful in life, that she will grow and tell her story and let people know that there is hope, no matter what life throws at you, or what doctors say, there is hope,” Higgins said.

Donations my be made via GoFundMe at https://gofund.me/d9d0bc8b