Home News Olympians Thompson-Herah and Forte give back 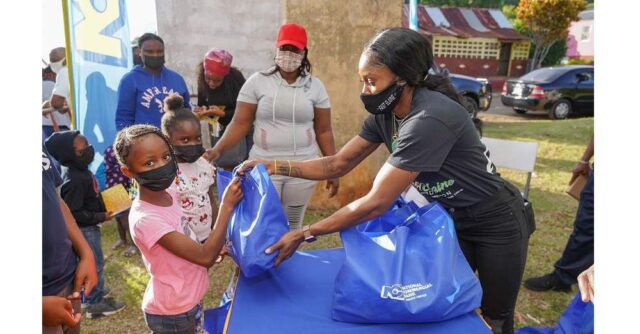 The community of Banana Ground in Manchester and Wolmer’s Boys’ School are the two beneficiaries of the Grant A Wish 2021 programme.

According to a press release, Thompson-Herah through her FastElaine Foundation distributed over 500 packages to residents in her birth parish.

Held at the Banana Ground Square in Manchester, residents from the surrounding communities also benefitted from the Christmas cheer.

Thompson-Herah said contributions from NCB Foundation boosted the ability to provide the food and care packages.

“I chose Banana Ground because that is my home ground; that is where I experienced Christmas for many years. I wanted to spread some blessings,” Thompson-Herah said.

Olympian Forte said his choice for a recipient was very simple.

“I was a part of the track team… I know what it takes to become a champion. But I know that funding is increasingly important especially in these times,” Forte said at the handover.​ “So, I am just happy that I, along with the NCB Foundation,​ ​ could help in giving back to my alma mater.”

Forte got the chance to talk to 12 members of the track team who are training for the 2022 ISSA Boys’ Track and Field Championships. He told them of his participation in the team that won the 2010 Championships, the 100th anniversary of the showcase.

“We had a specific culture, we all helped each other. We had a belief in ourselves and our system that was the key factor in securing our win,” Forte said.

“Though track and field is an individual sport, at this level it is team-based, with everybody scoring points so that we can all win. It is important that each of you help the other one to achieve the goal because at the end of the day it’s all for the team. Things always look impossible before they are done,” Forte added.

​Principal Dwight Pennycooke said in accepting the donation that the entire ​​​Wolmer’s​ community was filled with gratitude.

“Undoubtedly, ​the young men will ​​benefit greatly, especially during this time of the pandemic and when we have to be considering matters of their mental health and their general well-being,” Pennycooke said “We need to have them engage in physical activity and the track and field program​ is key to that. So again, a big thank you on behalf of the entire ​​Wolmer​’​s Boys’ School. Thank you.​”