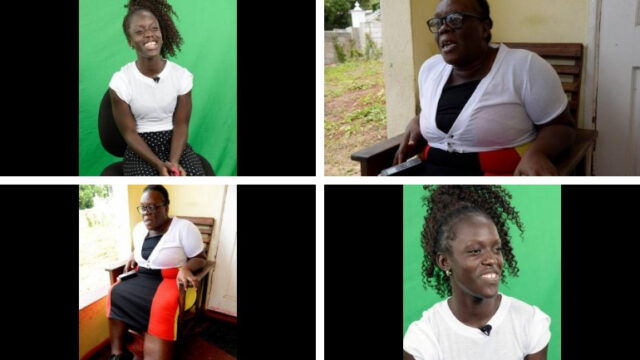 Sherlette Black is a broken woman. The mother of Ladasha ‘Mackerel’ Francis, Black has spent the last few weeks watching in despair as her daughter uses her proclivity to ‘tek people man’ as a way of racking up ‘likes’ and followers on social media.

Black said that she is extremely disappointed with the image that her only daughter has been portraying.

“I wanted her to be professional, and taking people man is not professional. At the end, of the day, she is mashing up herself and she has to think about what she will tell her children and grandchildren,” Black said.

“She has to be mindful that one day this fame will end and it will be over in a minute. Ladasha, where is your talent? I want you to focus on getting a level of education and start a meaningful career. And why won’t you take your own man instead of taking people’s own,” she added.

Mackerel, has 71,000 Instagram followers and 28,000 followers on Facebook. In an interview with THE WEEKEND STAR last month, Mackerel defended her stance about ‘tekking people man’. She said that she has no significant other at the moment and is content because other people’s men are just fine with her.

While stating that she is ashamed of her daughter’s behaviour, Black said she is, however, not shocked by the image that she currently portrays.

However, Black said her daughter was an uncontrollable child. The mother, who is visually impaired, said Mackerel is legally blind, and that she had to undergo a cataract-extraction procedure while attending the Salvation Army School for the Blind. Stressing that she tried her best with Mackerel, Black said her child began drifting after sometime in 2011. In January of that year, Black was among a group of visually impaired persons who were mowed down by a vehicle at Matilda’s Corner in Kingston.

“I couldn’t walk for months, so I had asked her father to assist me with her, and during that time, I got a scholarship to go to Buffalo in the US to study, and I think that was the time that all things went downhill. Her father stopped her from boarding at the institution as he wanted her to ‘know the world’, so he let her commute to school daily,” Black said.

Black said Mackerel became extremely unruly and would often visit other places before heading home in the evenings.

“Although I asked him to keep her, she would still come to me, but there were times that she would go to places before she comes home. She would reach home late and tell me she was at extra lesson, but when I called the school, her teachers would tell me she leave long time. Sometimes I would get call from staff at the Half-Way Tree Transport Centre that she was changing from her uniform into regular clothes to go about her business. Persons knew her because I used to take her with me on the bus whenever I would go on them to perform,” the mother said.

She said her daughter did poorly in the GSAT exams in 2013 and was placed back at the Salvation Army School for the Blind but she encouraged her do her best.

“I told her that we all went to the School for the Blind, and it worked well for a lot of us. I told her I wanted her to excel in life, and so on. However, just a few hours after I spoke with her, her father called me to say that she had not returned home from school. This was the second time she was running away, because she ran away at age 11, and the Spanish Town police called me to collect her,” Black said.

Black said her daughter remained missing for more than a month, and during that time, photographs of her were in circulation over the media as a missing child. It was during that time when the then 12-year-old Mackerel became pregnant with her now five-year-old child.

“The police called me to tell me that they had found her and I should come by CISOCA’s (Centre for the Investigation of Sexual Offences and Child Abuse) office, and my motherly instinct told me that something was wrong from I touched her. I can’t see well, but I knew she felt different and I was later told that she was pregnant. She was then placed in a children’s home. The matter went before the court and the judge had ruled that because she was an uncontrollable child, myself or her father will not be penalised,” she said.

Black said Ladasha and her son lived with her for little over a year and then she ran away once more, this time taking her baby with her.

“Once again, I reported that she was missing, and she called me one night and said that she was not missing. At the end of the day, all I want Ladasha to do is to change, and know that I am her mother and I will never forsake her. I really don’t know why she is giving persons the impression that we don’t have a relationship. I don’t know if she is trying to protect my image or what, but being blind is nothing to be ashamed of. We were born this way,” she said.

Sherlette Black is a broken woman. The mother of Ladasha 'Mackerel' Francis, Black has spent the last few weeks watching in despair as he daughter uses her proclivity to 'tek people man' as a way of racking up 'likes' and followers on social media. Black said that she is extremely disappointed with the image that her only daughter has been portraying.Read more: http://bit.ly/2V3rHwB