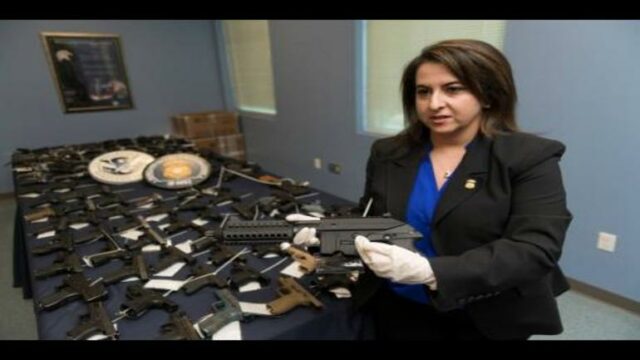 Highly placed executives within Miami’s Homeland Security Investigations (HSI), the agency primarily responsible for border security in the United States, say they are doing everything to stem illegal guns entering Jamaica from the US, but stopping the flow is impossible.

Rana Saoud, acting deputy special agent in charge of Division I, HSI in Miami, home to one of the largest cargo ports in the US, said detecting every gun tucked away in the thousands of containers that leave that shoreline each year is impractical.

“A lot of shipments go in and out of the United States on a daily basis. We cannot search every single package that leaves the United States,” confessed Saoud, during a special interview at the HSI headquarters in Miami two months ago.

“But once we identify these mechanisms, and once our Jamaican partners say, ‘Hey, we just seized this,’ we start going back into the United States to try to figure out who is shipping these so we can prevent another shipment from going out to Jamaica,” said Saoud. Port officials said that fewer than one per cent of the roughly 357,000 containers that left Port Miami last year were fully examined.

Another 10 per cent, or 35,700 containers, underwent X-ray analysis, while the doors to most of the others were opened, and their contents glanced over before they were sent on their way.

At least three cargo ships laden with a minimum of 300 containers leave for the Caribbean every two weeks, and these ships, in most cases, use Jamaican ports as trans-shipment points to or from countries such as the Dominican Republic and Haiti.

These do not include air cargo – through which criminals in 2017 attempted to smuggle 119 illegal guns and more than 200 rounds of assorted ammunition in two barrels and cardboard boxes, listed as comprising household and food items.

The weapons, mostly pistols and a wide array of assault rifles – some were deconstructed to mask their appearance under inspection – were put on display at the HSI Miami headquarters.

“Our job is to try to identify who are receiving the weapons in Jamaica and who is sending them from the United States … . Our job is to investigate, disrupt and dismantle the entire criminal networks,” said Saoud, noting the brazenness of criminal syndicates trying to smuggle weapons from the US into countries such as Jamaica.

“We see stuff going out in cars, furniture, sometimes it is just a duffle bag in a container that is going out, and that container is empty,” she said, adding that the criminals rely on partnership with other groups and individuals – some in high places, and others unsuspecting.

“Sometimes it is not somebody who is complicit; but they (criminals) just tell them, ‘Hey, just pick this box up for me and send it to this address for me.’ That’s when the investigation comes in for us,” said Saoud, noting that many investigations into gun and ammunition smuggling in the US started after the weapons were detected in Jamaica.

The HSI Miami said that in recent years, it has detected more than 3,000 individuals who had attempted to smuggle guns and other contraband into Jamaica and other Caribbean countries.

The agency said at least one suspect has been arrested in the 2017 gun find, and that like in other ongoing cases, it is working to identify all the other players in the syndicates who send guns to Jamaica.

For that reason, HSI has called for a stronger partnership between HSI and Jamaican authorities, which it says does not always provide timely information to the designated agency with responsibility for detecting and disrupting the flow of illegal weapons and personnel.

“In Jamaica, one of the things that are a challenge to us is the Customs Mutual Assistance agreement that hasn’t been signed yet. It has been going on since 2005,” explained Saoud, adding that this agreement would greatly bolster information sharing between the countries.

In April, the US Department of State, in its 2019 International Control Strategy Report, said the agreement should be signed off on later this year.

“[The agreement], in the long term, will assist in targeting the flow of drugs, guns and other contraband through US and Jamaican ports of entry,” the report stated, noting that in 2018, Jamaica ended an existing non-binding memorandum of understanding formerly used to intercept information as it did not satisfy stipulations of the Jamaican Constitution.

The State Department underscored that the absence of a formal agreement to share and intercept information has hampered US investigations in some areas.