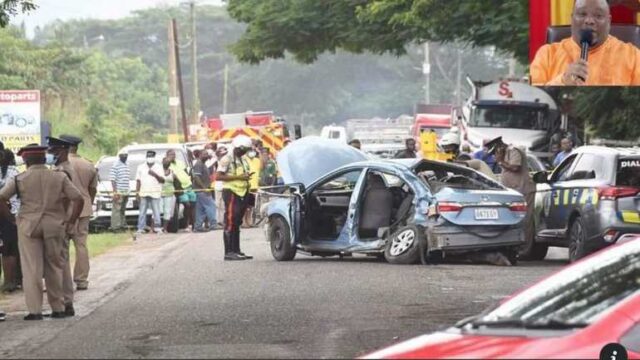 Despite police confirmation that disgraced Pastor Kevin O. Smith was killed in a motor vehicle accident on Monday, members of his faithful flock at the Pathways International Kingdom Restoration Ministries in St James are claiming that he is not dead.

Members of Smith’s congregation turned up at the church after news broke that he had died. But instead of mourning, they appeared quite composed, claiming that through some unexplained miracle, Smith was still alive.

A member of the church who gave her name only as Doris said that Smith was gifted with supernatural powers and could not be killed in an accident.

“Dem think we a fool. His Excellency cah dead suh … . We know everything what a gwaan,” the woman told The Gleaner, referring to one of Smith’s grandiloquent titles.

“His Excellency always tell we bout a day like this and we did a look fi it fi happen. You think a man who a heal people all him life and a mek cripple walk, deh mek dumb talk, and a mek blind see can just dead suh?”

Smith was among almost four dozen church members who were detained on October 17 after a bizarre death ritual in which two congregants were killed and another shot dead by the police as they sought to intervene.

He was expected to be charged with murder and other offences on Monday.

Other members of the congregation told The Gleaner that they believe that the entire accident was staged by the authorities to get rid of their beloved pastor for good.

Some of Smith’s hardcore followers said that even if their leader were dead, it would not break their faith or dismantle their congregation.

“Look pon His Excellency pon the video. Him cool just like when him inna church. Look pon him body: not even a scratch nuh deh pon him. Him peaceful like a lamb,” said a woman, who had reviewed footage from the accident scene.

The members revealed that Smith had a succession plan and that he had been training an unidentified young man from the congregation as his heir apparent.