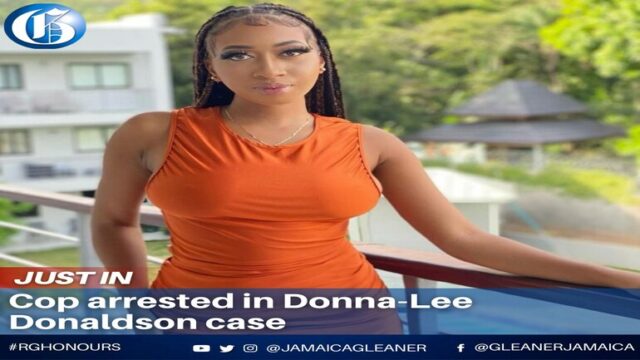 Noel Maitland, the cop implicated in the case of missing social media influencer, Donna-Lee Donaldson is in custody.

He surrendered to the Jamaica Constabulary Force’s Counter-Terrorism and Organised Crime unit on Wednesday, his attorney, Christopher Townsend says. #GLN

The Police High Command has taken Constable Noel Maitland into custody in relation to the disappearance of his girlfriend, 24-year-old Donna-Lee Donaldson.

The Constable was arrested following what’s being described as a marathon case review session with the Office of the Director of Public Prosecutions, Paula Llwelleyn, last night.

It’s understood the DPP and her senior prosecutors advised police investigators that there is now enough evidence to commence the process which will lead to formal charges being laid against Maitland.

Following this detectives from the Counter Terrorism and Organised Crime Investigation Branch arrested Maitland. He was arrest this afternoon.

Maitland is now formally a suspect in the matter. The police are said to be continuing investigations into the matter.

Police investigations into the matter have intensified, as have a series of protests by Donaldson’s friends and relatives.

Maitland’s removal follows a similar withdrawal of the mother of his child from front line duty. The woman District Constable was served with a notice on Monday.

Maitland is being represented by attorney-at-law, Christopher Townsend.