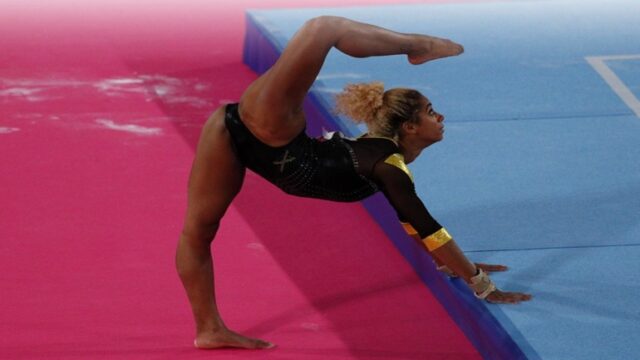 Gymnast Danusia Francis was beaming with pride after she finished seventh in the women’s all-round final at the Pan American Games yesterday as she continues Jamaica’s rise in gymnastics.

Francis, who created history when she qualified for the all-round and the balance beam which she will contest on Wednesday, tallied 51.650 points in all four categories with a scorecard of 12.750 in the uneven bars, 12.650 in the floors, 12.750 on the balance beam, and 13.500 on the vault.

“I am incredibly happy with how I did today. My aim was to come in the top 10. Obviously, the top six was a great group in front of us. There were all extremely good contenders so to come behind those six was amazing,” she said.

“To represent Jamaica in our first gymnastics final, I couldn’t be more proud and I’m excited to do it all again on Wednesday.”

The defending champion Elizabeth Black of Canada retained her title with a combined score of 55.250 points.

Despite a disappointing score of 12.600 in the floor exercise, Black’s leading scores in the vault (14.450 points) and uneven bars (14.300) and a strong score in the balance beam (13.900) was enough to secure gold. USA’s Riley McCusker took silver with 55.125 points, while Brazil’s Flavia Saraiva edged out Kara Eaker of the United States for bronze with 54.350 points.

Francis will be going up against the medallists once more when she competes in the individual balance beam final scheduled for Wednesday at 1 p.m.