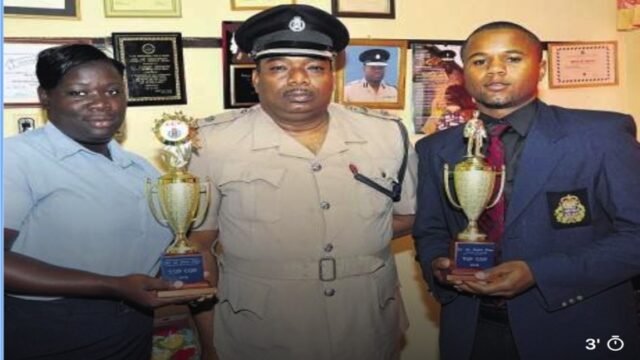 A Jamaica National Building Society-sponsored trophy went to the top male officer and the trophy for the top female officer was sponsored by the Cotton Tree Citizens’ Association.

Superintendent for the Manchester Police Division Marlon Nesbeth described Brown, who is assigned to the Mandeville Police Station, as a fearless crime fighter.

“One of the highlights of him being selected was (Brown) telling the story of how he outsmarted some notorious guys who were serial rapists…over a year ago. They created havoc on the female populace in Manchester. He dressed himself like a female and lured the perpetrators and was able to apprehend them. This matter is presently before the Manchester Circuit court,”      he said.

Nesbeth said that District Constable Maye of the Kendal Police Station is noted for her customer service virtues and community involvement in the Kendal police area.

“It was something which I expected because I worked towards the achievement. For some time now I have seen myself as the top cop,” Brown told the Jamaica Observer.

He said he has been serving in the Jamaica Constabulary Force for 10 years and has aspirations of one day holding the position of commissioner of police.

Brown, who is a sub-officer in charge of the Manchester Street Crime Unit, said that policing is his first love and he will be furthering his education soon.

In July, Maye will mark her fifth year as a district constable.

“I feel good knowing that after so many years I have achieved something from my work and that persons I work with see the potential in me.  (I will) continue to do the work in a professional manner; to serve, protect and reassure, as the motto says,” Maye said.

Third-term chairman of the Mandeville Police Civic Committee Osbourne James Lawrence said that his organization has been working with the police for over 30 years.

For this year, he said, 15 police officers from police stations in Manchester were nominated for the award based on their exemplary work.

The candidates reportedly went through an interview and the particular qualities of Brown and Maye impressed the adjudicators.

Lawrence believes that the annual award is one way of helping to build morale among police personnel.

He said that the committee is also instrumental in raising funds for mainly the Mandeville Police Station and to assist in ways such as procuring water drums, a photocopy machine, stove, and refrigerator for use by on-duty policemen and women, air conditioners for some sections of the station, and tyres for police service vehicles.