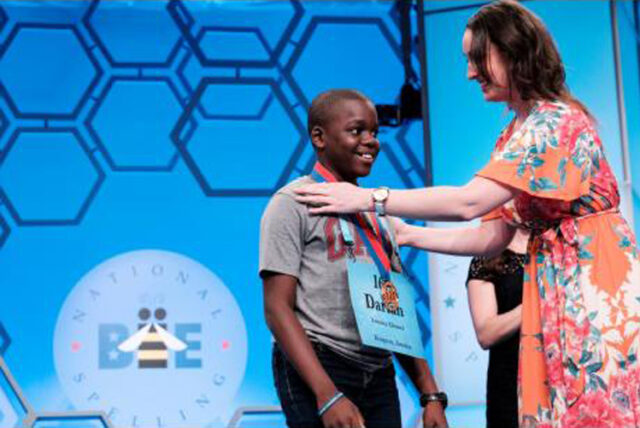 (Jamaica Gleaner) With an expression of shock as he collected his medal, The Gleaner’s Children’s Own 2019 Spelling Bee champion Darian Douglas has landed a spot in finals of the Scripps National Spelling Bee in the United States.

The finalists were announced yesterday after two days of on-stage spelling, during which more than 400 spellers were eliminated.

An ecstatic Errol Campbell, Darian’s coach, told The Gleaner that this accomplishment is only phase one of their set goals.

“I am extremely excited. We have achieved this one, so we are now going to take it step by step going forward. I am really overjoyed and we are going to work … to bring the trophy home to Jamaica,” Campbell said.

At the beginning of the competition, spellers took a multiple-choice test with spelling and vocabulary questions on Monday before undertaking two rounds of spelling to select the finalists.

Darian and Ashleigh Jarrett of Immaculate Conception High were both selected to stand on stage for the announcement of finalist in recognition of being among the top 117 scorers. However, only Darian made it to the finals.

Out of the 562 spellers from around the world who entered the competition, only 50 finalists were selected.

The other local contenders, Titchfield High’s Rhonoya Anderson and Honey Advani of Heinz Simonitsch School, were eliminated after round three of the competition.

Spellers eliminated after round three and before the finals are tied for the same place.

The finals begin today at 10 a.m. Eastern time and will be aired on ESPN.