Home News Jamaica: Honesty pays off for woman who handed over millions found at... 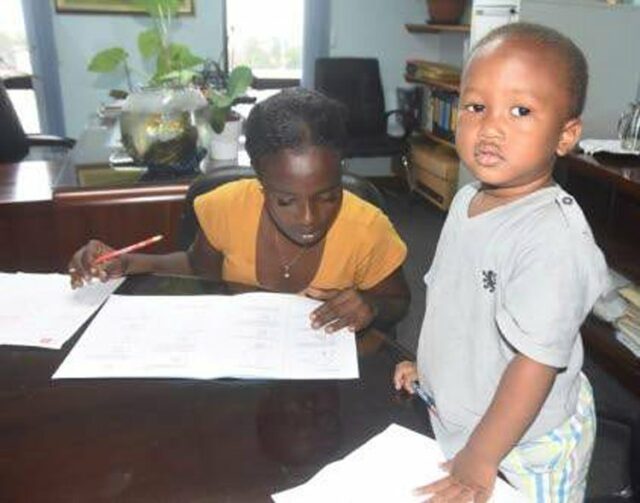 (Jamaica Observer) Ackaisha Green, the 24-year-old mother who was ridiculed by her mother for turning over to the police a bag of cash she found in an ATM two weeks ago, is now the recipient of a flood of kindness from Jamaicans here and abroad.

Yesterday, her hope of pursuing a housekeeping course at HEART Trust/NTA became a reality as the agency not only had her fill out an assessment paper but named her its first ambassador.

“We are going to take you around to speak to other young people, to spread the message, so when we do our professional and development sessions we are going to be inviting you to ensure that you are that beacon of hope for young people. We are truly heartened and we look forward to working with you,” HEART Trust/NTA Director of Employment and Career Services Rayharna Wright told Green at the agency’s Oxford Road office in St Andrew.

Green, whose story was reported by the Jamaica Observer on Monday, said that she was pleased with the agency’s gesture.

While she was grateful for the skills training opportunity, Green expressed doubt about being able to maintain her attendance at the educational institution. That apprehension, though, was eased by the agency which presented her with a gift certificate that will cover the cost of completing levels I and II at its Learning For Earning Activity Programme (LEAP) Centre.

Green was inside the ATM at Central Police Station on East Queen Street in downtown Kingston with her son Joshua, two Wednesdays ago, when she stumbled upon a stash of cash, suspected to be in the millions of dollars, in a large transparent plastic bag. But she felt it was not hers to keep.

The money could have gone a long way for the mother of two who ekes out a living in inner-city James Street in Central Kingston. But she insisted that handing over the money was the right thing to do.

“Mi coulda take it weh, but mi never take it weh. On my way coming out with it I saw two police officers, and mi say ‘Sir, I found a bag of money and I don’t know what to do with it’,” Green recounted to the Observer.

Within minutes of her handing the police the bag — which she said contained $5,000 and $1,000 notes — an armoured truck bearer, who had apparently forgotten the bag of money in the ATM, ran into the station, breathless. The undisclosed sum of money was subsequently handed over to him, police at the station said.

Last week Tuesday morning when the Observer visited Green at her house, she received a heavy tongue-lashing from her mother who described her as “the stupidest of all my children”.

“A mi she beg $200 this morning to give her son to go to school,” the mother complained, with a loud hiss of her teeth.

However, Green insisted that turning over the money to the police was the right thing to do.

Within minutes of the story’s publication on Monday, readers locally and overseas contacted the Observer offering to help Green and reward her for her honesty.

In addition to HEART Trust/NTA, NCB Foundation, Bank of Jamaica, and KingAlarm Limited expressed interest in assisting her. Some of the readers who pledged to help said they wanted to do so without fanfare.

“As I told you last week, I was not expecting anything,” Green reminded this reporter yesterday. “As I told you before, it was not mine to keep. I am overwhelmed. Persons have been calling; I asked for one help so I wasn’t looking forward for all this help. For somebody to give me something out of nothing that’s a whole lot of appreciation.”

She also responded to criticism she received, especially from social media users.

“It doesn’t matter what the world is going to say about me, giving it back was the right thing to do. It wasn’t mine,” she insisted.

Julia Smiley-Green, HEART Trust/NTA director of marketing and communication, said Green’s story reassured the nation that there is still hope and people with good values left in society.

“Thank you for choosing to do the right thing. Thank you for setting a good example for Joshua to follow,” Smiley-Green told the young mother. “We know that there are a lot of comments that may somehow want you to rethink what you have done, but we want to encourage you to stay positive. What you did was the right thing to have done; there is no other option and we are really heartened to have you here this morning.”

Yesterday as well, Professor Donna Hope from The University of the West Indies, who was at the HEART Trust/NTA office, said she was moved by Green’s story.

“We are putting together assistance from Jamaicans who are here and abroad to try and also help you with going through the process of your education as best as we can,” Hope told Green. “One of the things we will do, with Ackaisha’s permission, is to set up a GoFundMe account so that the Jamaicans who are abroad can be able to contribute easily and then we will manage the account.”

In the meantime, attorney-at-law Walter G Melbourne is cautioning the public against scoffing at Green’s good deed. He said that failure to return any lost items that are found is a serious offense known as larceny by finding that attracts a maximum of five years’ imprisonment.