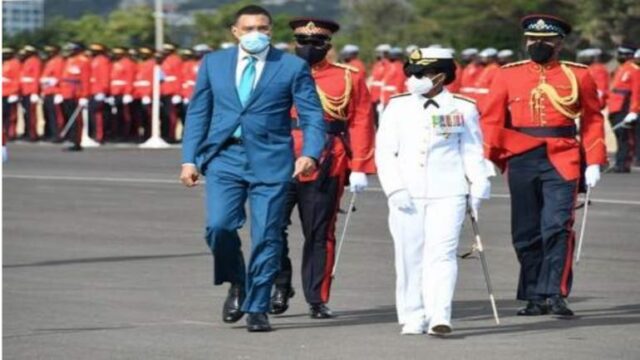 Wemyss-Groman, who joined the Force in 1992, said the JDF is prepared to tackle the crime and violence issue facing the country.

“As we deal with issues of safety and security as a nation I am confident that the JDF is prepared to confront the challenges to our peace and security…Together we must act with earnest as we prepare for the challenges ahead and shape the security of the country for our children and grandchildren for years to come,” Wemyss-Gorman said in her address at the parade.

“I will lead by example and encourage every member to execute their duty cognizant of our core values… we must do our jobs well and to the best of our ability,” she advised the force.

“I must thank the Governor General and the Defence Corp for their trust and confidence in appointing me to this position. I consider the immense responsibilities inherited. [It] is hard to bear that my size seven-and-a-half feet have some very large shoes to fill,” she said, adding that she is prepared for the position because in difficult times people are known to rise and exceed expectations.

Meanwhile, in his out-going address Meade expressed his gratitude to the Government of Jamaica and the people for what he considered as their trust in him to lead the nation’s military for five years.

“My comments today are simply focused on gratitude. I want to thank his Excellency, the Governor General and the Most Honourable Prime Minister for their trust and confidence in placing me for five years to command the Jamaica Defence Force… I would like to thank the people of Jamaica for their support and confidence and understanding that notwithstanding the immediacy of several challenges you face, that you welcomed the long-term approach for a sustainable solution in regards to the cultural violence of Jamaica,” Meade said.

He continued: “While in the medium term we build out and continue to build out the Defence Security and Justice Systems, of course, in the short term you are faced with immediate challenges and we will continue to support the Constabulary Force in the effort of keeping the security situation to a manageable level.”

He added that he is pleased that both the Government and the Opposition welcomed the military’s 20-year plan to tackle various issues facing the nation.

“It’s a 20-year plan which is not focused on which party may be in power, because obviously we cannot predict over 20 years. And we hope that the plan is sufficiently generic and relevant that it can apply to any Government policy position,” Meade explained.

However, speaking to Wemyss-Gorman, Meade said, “After a rewarding 38 years of service it is time for me to say farewell to my JDF family. I take comfort in the words of an ancient Greek statesman, ‘what you leave behind is not what is engraved in stone monuments, but what is woven in the lives of others.’ It is well known that there can only be one CDS at a time, so as I hand over to Rear Admiral Wemyss-Gorman today and proceed on permanent leave. It is my privilege, Admiral, to serve under your command for the next month.”

A career officer with more than 29 years of service, Wemyss-Gorma has performed at strategic level of command within her technical area of expertise and in other domain, both internal and external to the JDF. The holder of a master’s degree with a distinction in national security and strategic studies from the University of the West Indies, she has held various command appointments across the force and is responsible for the establishment of the Caribbean Military Maritime Training Centre and the Maritime Air and Cyber Command, which includes the JDF Coast Guard, the JDF Air Wing and Special Forces. Other notable appointments, external to the JDF, include a secondment to the Ministry of Transport and Works as deputy director for marine transport, appointments to the Fisheries Advisory Board, and the National COVID-19 Response Advisory Committee.