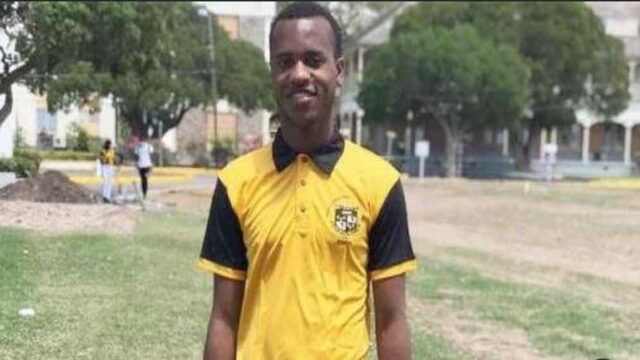 At age 10 Jevonnie Codlin struggled with the death of his parents.

His mother and father died two weeks apart, and he was raised under the guidance of his grandmother, Viviah Green, in Tivoli Gardens, west Kingston.

A Tivoli Gardens High School student in 2015, he was supposed to sit his Caribbean Secondary Education Certificate (CSEC) exams but couldn’t do so because he didn’t have a birth certificate.

Today, 22-year-old Codlin has been appointed as the head coach for Tivoli Gardens Football Club Youth Programme while reading for a degree in physical education and sports at The Mico University College.

“My childhood was extremely arduous. I lost both of my parents when I was in grade four, two weeks apart. My grandma took the baton. I love my grandma with all my heart. Many wouldn’t know but I’ll leave certain things unsaid. It is very arduous to live without both parents at such an early age as many times when I was in primary school I would cry when I saw my classmates’ parents or guardians coming in with them whenever we were entering a new school term,” Codlin told the Jamaica Observer in an interview.

And, when his teacher inquired as to why he was crying, Codlin lied his way out of being pitied.

“I would normally tell her that I am in pain, or I was having a headache,” he said. My grandma didn’t have much. She tried her utmost best in the early mornings by mixing my Lasco tea or sugar and water while I was getting ready. She would wake early every morning as if she was the one attending school. She usually was in a small job but she didn’t get much. Whenever she get paid she would buy the little things that I was in need of. I appreciate her.”

When it was time for CSEC, Codlin told the Sunday Observer, he was met with disappointment. Even worse, his classmates and friends would advance without him.

“My mom misplaced my birth paper and my grandma didn’t have that lofty amount of cash to pay for CSEC. My granduncle, Denzil Henry, played a pivotal role late in my life, where he was the one who sorted out my birth paper. I would normally meet him on Saturdays where he would give me a few life lessons and they were always meaningful and solid,” he recalled.

A football enthusiast, he began training younger students while he was in upper sixth form. It was completely voluntary, and it continued for two years until he was noticed and contracted as head coach at Tivoli Gardens High School.

“There was a staff meeting at the complex a few weeks ago where it was revealed to all the staff. I am ecstatic! I am super happy about my appointment. It’s an incredible opportunity for me. I know it’s an immense task. I expect it to be. I work with my personal assistant, someone who I trust – Kado Brown. He is a very uplifting young guy. I have had experience in the field already as I was a part of the Denham Town High School football programme for two solid years where I was working with Omar Edwards and Kimahti Makonnen,” Codlin said, excitedly.

“I must publicly express my gratitude to Mr Campbell, the club manager, and also the president, Miss Spence. They both have shown incredible trust in me to lead these boys out. I also coach at Exodus Football Academy.”

“It’s very important to me,” he added, noting that it’s his dream to be “one of the best football coaches in the region”.

“I work hard on my craft. I eat, sleep, and dream about football. I am always thinking about football even on a Sunday, which should be my day off. I would be thinking about moving a player from LB [left back] to CM [central midfielder]. I am always reading or listening to podcasts. I am hungry to learn everyday about the sport. My belly is never full when it comes on to extending my knowledge of football,” said Codlin.

But, while coaching, he is really playing on a bigger field. Codlin told the Sunday Observer that another goal is to ensure that his boys, ages 10 to 17, are engaged and given a legitimate medium through which to express themselves.

“I remember a particular day when training was finished and I was having my team meeting. I had 20-plus children [and] I asked for those who live with both parents to raise their hands. Best believe only one went up. Then I asked them to raise hands if their dad passed away and 95 per cent of the hands went up. That’s the reality we have to face,” he said.

“When you look around the household of these children, with all respect to all their family members and relatives, there’s not much guidance around it and this is not only in Tivoli. It’s also in the surrounding communities, such as Trench Town, Seaview, Jungle, South, you name them . It’s a massive challenge that needs to be dealt with in a professional manner. These children need help. They have incredible potential… not only in football. I always sing to them: Education is as pertinent as football. It’s my anthem,” he continued.

Codlin said as a product of the inner city there is a need for more community-based programmes to engage promising youth who just need a hand up.

“A lot of meetings should be organised to hear their voices and to hear what’s going on in their minds. A kid may not feel comfortable to speak about what they’re going through with someone at home and would love to conversate with someone, but when they look left and right they don’t see anyone. You won’t save all, but at least save one. That’s my belief.

“The children in the inner city are always all over the place – majority of them. I know many garrison parents who have vigorous control over their child, but how many of them have that control? When they are outdoors and don’t have much to do they get all caught up in all the negative things, which is very sad.”

Codlin told the Sunday Observer that, short term, he plans to complete his studies at Mico and then extend his coaching to the Jamaica Football Federation (JFF).

“I want to [go] all the way up with the highest coaching certificate available in the Concacaf [Confederation of North, Central American and Caribbean Association Football],” he said, in reference to his long-term plans.

“I just want to say to all garrison youths, hold your heads up,” he added. “We all have the ability to create and make a difference. Don’t limit yourself. Immense praises to my grandma, uncles, aunties, cousins, friends, and last, but [not] least, Renae Ricketts. I appreciate everyone who played a small role at some point in my life, even if it was for one day. I appreciate it.”