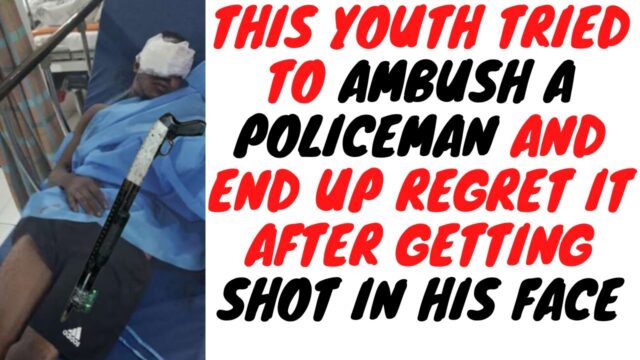 ST CATHERINE, Jamaica – An alleged gunman was shot and injured by a policeman on Saturday night in the Fairfield Road area of Spanish Town, St Catherine.

He has been identified as 23-year-old Michael Smith, otherwise known as Jahnoy, of a Fairfield Road address.

Police report that about 11:45pm, Smith and an armed accomplice attempted to ambush the policeman after the cop pulled up at his home, but the lawman took evasive action and fired at his attackers hitting Smith. Both gunmen fled on foot but Smith later turned up at hospital with gunshot wounds to the face and was admitted in serious but stable condition.

Smith was subsequently hit with a battery of charges including shooting with intent, discharge of firearm and recovery of firearm

Police recovered a shotgun, one live 12 gauge round, several 9 mm casings, and a red and white mask from the scene.