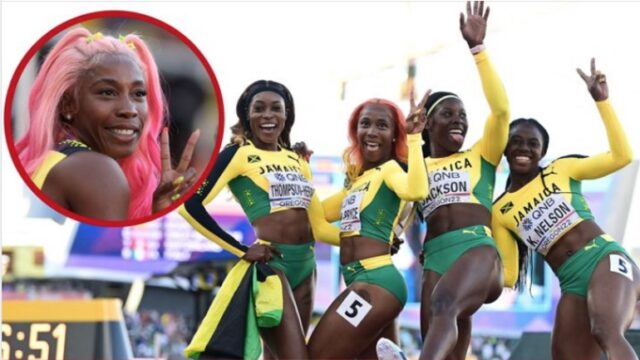 She said while it is understandable that there is a disappointment when results are unfavourable, fans should not “cuss” the athletes.

There were high hopes on Saturday’s ninth and penultimate day of the World Athletics Championships at Hayward Field in Eugene, Oregon, that the women’s 4x100m relay team would not only retain the gold medal but challenge the world record of 40.82 seconds set by the USA at the London Olympics in 2012, beating Jamaica to the gold then.

The team of Kemba Nelson, Elaine Thompson-Herah, Fraser-Pryce and Shericka Jackson however finished second in 41.18 seconds, a whisker behind the USA’s 41.14 seconds, much to the disappointment of fans at home and overseas.

And there was also disappointment hours before the start of the race when Nelson, who was second at the Jamaica Trials behind Jackson and who had anchored the team in the semi-finals, was named to start in the finals, as opposed to Briana Williams who many were expecting to get the nod.

Williams had led off the team that set a national record 41.02 seconds at the Tokyo Olympics last year as well as the first round here on Friday.

Fraser-Pryce had said the Jamaican team was not guaranteed a medal before the start of the race and would have to work for it.

“I know that we are going to have some of our fans who are disappointed and will have their own order of how the relay should have been run, what we should have done, and where what went wrong, and that is okay to feel that disappointment,” she noted on Saturday.

“But what is not okay is to cuss our athletes or to have rude comments, because every single person who is on this team deserves to be on the team and we have to give athletes a chance to represent as that is how you grow as a nation. If you are not able to call on any of the individual sprinters we have to represent, then, you know, who are we?”

The 14-time World Championships medallist argued that the entire squad of sprinters is valuable to the cause.

“Anything could have happened to the three of us who ran the double; we could have been tired or hurt and we would not be out there so I am hoping we will have some empathy towards our athletes and understand that it takes a lot of work and it’s a lot of pressure.

“And to be out there representing your country is already a plus, and to make the final is a plus. They got us in the final and without them we would not be here, so we are just grateful that we are able to represent and that we will have another shot at this,” she said.

Earlier, Fraser-Pryce had told journalists that each team starts the race on an even keel.

“But we came away with a silver medal and it could have been worse, but it wasn’t and we are glad that we continue to have these experiences — and hopefully one day we will get it right and we will have much success.”

Personally, she said she was unable to analyse her own leg as she was still waiting to see the replay.

“I am waiting to see the replay then I can tell you ‘Okay, then it was like this.’ But, I felt good and I got the baton and I just ran as hard as I could to catch Shericka, and I gave her the stick and we were really hoping that she could get the gold medal on the anchor leg — but it was not to be. And we are just grateful that we are able to come away all for ladies injury-free and we live to fight another day,” said Fraser-Pryce.