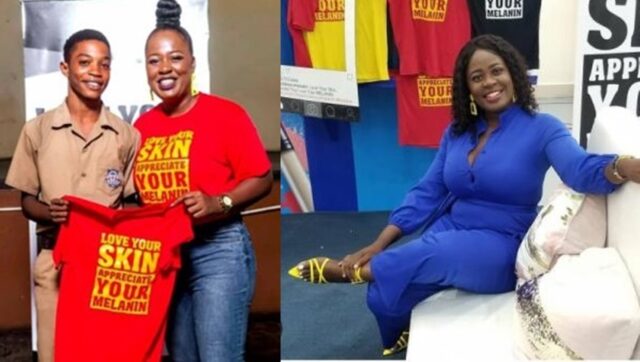 (JAMAICA STAR) — At just 11 years old, Shari-Ann Henry began to bleach her skin. Having been constantly told that being black meant she was ugly, she decided that being a ‘browning’ was the best option for her.

Bleaching was nothing new to her, as almost everyone in her household was doing it. But, to Henry’s dismay, the self-esteem boost that she had expected did not materialize, and after several months of ‘rubbing’, she began to avoid mirrors at all cost.

“I hated the mirror. When yuh a go school and get up in the mornings, you would be happy to look at yourself, but I wasn’t. I did not have a mirror in my bag or anything like that. I did not like to see myself,” she told THE STAR.

It was not until the fifth form that Henry finally stopped bleaching and vowed to love herself and her complexion. She explained that she had finally realized that skin bleaching was not correlated to having a bright future and she decided to recreate her outlook on life.

Now 28, Henry has started a ‘Love Your Skin, Appreciate Your Melanin’ initiative with the aim of getting young people to love and accept themselves.

“The initiative was launched in June, and so far we have had 18 outreaches. We have been to Charlie Smith High, Trinity High, Tarrant Park, Windsor Height Community (in Clarendon) and Spot Valley High in Montego Bay. The plan was to start in the municipality, but when schools heard about the initiative they reached out,” she said.

Henry told THE STAR that although there has been a worldwide drive about accepting one’s black skin, many young people are still bleaching and toning.

“Nuh matter how much you talk to them, preach to them, they are still doing it; and these are persons within the 11-25 age group. In my mind, when I was doing it, there was no one really to talk to, to give me advice and to tell me to stop. I believe that given that I have moved from that plight and have accepted myself for who I am today, I would be able to talk to those who are in a similar situation or the prospective bleachers,” she said.

She also wants to reach out to persons who are non-bleachers but still have difficulty accepting themselves for who they are.

“I want to spread the word about self-love, self-acceptance, and self-worth. Once you preach this, even the persons who want to do tummy tuck or breast implants will reconsider it. Once you love yourself, there are some things that you will not do,” she said.