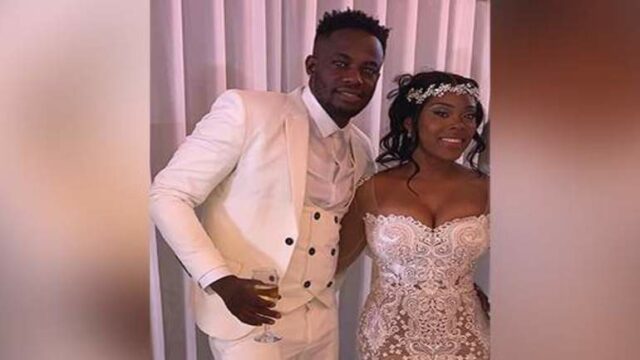 DING Dong has entered a new phase in his life.

The dancehall choreographer-cum-deejay tied the knot with his long-time girlfriend, Shauna, at Hope Gardens in Kingston on Saturday.

The ceremony was attended by several players on the entertainment scene, including Shizzle Sherlock, selector Boom Boom, and Romeich Major, principal of Romeich Entertainment.

Ding Dong was clad in a white suit complement with a black bow tie.

Hailing from the Nannyville community in Kingston, Ding Dong (given name is Kemar Ottey) started out as a dancer. He first recorded for producer Danny Champagnie. He later made a guest appearance on Voicemail’s Wacky Dip (Tribute to Bogle), which was produced by Don Corleon. He was also featured on Voicemail’s next hit Ready to Party, which was also produced by Champagnie.

However, the first solo hit he earned came via New York-based Ricky Blaze, who worked on the infectious Bad Man Forward Bad Man Pull Up, which not only topped local charts but also got ample rotation on New York’s influential Hot 97 FM.

“Ricky Blaze said he had a rhythm and he wanted me to put a vibe on it. It became one of my biggest songs to date,” said Ding Dong.

In 2009, he scored again with Holiday, featuring singer Chevaughn Clayton.

A staple on the entertainment scene for the past 13 years, Ding Dong’s other songs include Bad Man Forward Bad Man Pull Up, Syvah, Lebeh Lebeh, Flairy, Fling and Cha Cha Bwoy.