Home News All eyes on me! – Craftsman looks to make millions from bold... 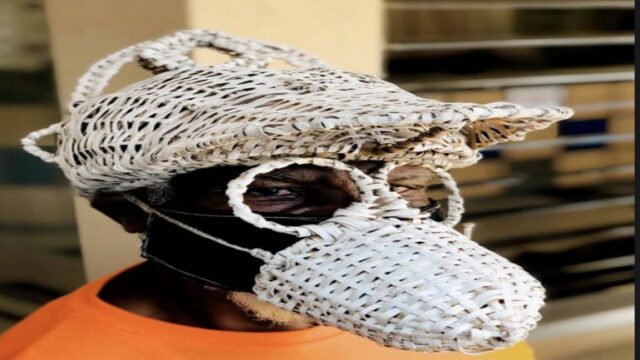 A small basket fits over Daniel ‘Bramo’ Williams’ mouth like a muzzle. He said that the item, which is made from wicker, is a face mask. But it is no ordinary facial covering; this one has peep holes that fit over his eyes like spectacles.

Bramo, 69, mindful that virus particles can easily pass through the spaces in his product, wears a cloth mask beneath it. He, however, does not sees it as a flaw in the design and is convinced that he can earn big money through its sale.

“Is COVID give me the inspiration for the mask. A lot of people tell mi seh dem like dem, but mi nuh sell any yet because mi want to copyright it because mi know it a guh take off big,” Bramo said. “When mi make it first, mi granddaughter tell mi not to go on the road like that. But when mi go, everyone like it and waah take pictures with mi.”

A gifted artisan, the senior citizen has a hat, phone case and bag that are all crafted from Rose Apple sticks and wicker.

“I call them my costume and when I don’t have them on going out on the street, I don’t feel comfortable. So I am complete whenever I am wearing them,” Bramo said.

Not surprisingly, his presence not only attracts gazes whenever he is in the public space, but many persons have asked him to pose for photos. And Bramo likes the attention.

“The amount a camera weh have mi across the world. Some people will ask to take picture with mi while others just take picture, but mi all over di world,” he said.

He told THE STAR that when he first created his eye-catching wears years ago, his sole desire was to create a unique look for himself. However, he soon found out that persons had more than a passing interest in his pieces.

“Mi nuh wear dem at home, mi did just want something to make mi stand out at road. But mi realise say old and young people like dem. Anyone who love costumes will love my design dem. All people who guh dance can wear dem if dem wah stand out,” he said.

Williams said he is from a generation of craftsmen, but he has managed to add his own creativity and style to his pieces.

“My grandparents use to build baskets but they couldn’t build like what I am doing now. I have advanced to another level, so I want to build a factory. I sell my stuff to some people but mi want to copyright it first. I have a portion of stuff home because I want to have a museum because I have a lot of things, including lampshades and clothes baskets,” he said.

While some may see the work of the elderly man as merely a Kodak moment, his craft represents financial well-being.

“I want to enlarge my business and image. If I sell the cheapest basket for a $100 and I have a million, then I would make a $100 million. I am not really focused on selling but more building. People are interested in everything that I am selling but I will be more established after I get my copyright document in three weeks,” Williams said.