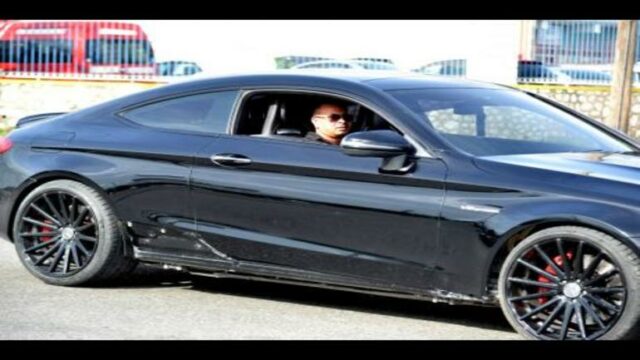 With a new video surfacing of a man of dark complexion driving the black Mercedes-Benz motor car seen performing stunts at a busy intersection, the Commissioner of Police Major General Antony Anderson has called for further investigations.

In a statement yesterday, Anderson said “based on information that has emerged from the investigations, I have instructed that this matter be pursued further. We will continue to keep the public informed.”

Dennis Dietrih, who is of light complexion, came forward and accepted responsibility for the incident at a press conference on Tuesday.

He apologised for the stunt to lawmen, including Assistant Commissioner of Police Bishop Dr Gary Welsh, head of the Public Safety and Traffic Enforcement Branch.

Dietrih was released without charge. But there had always been some speculation as to whether he was the driver.

Regardless, taxi operators are expressing outrage over the ‘slap on the wrist’ Dietrih received.

They believe a simple apology would not have sufficed if it was one of their colleagues caught in a similar situation.

“Wi as taxi man, wi get traffic ticket fi some offence weh nuh really relevant, weh dem cudda have leniency pan us. So why is it so different with this particular driver?” asked Franklin, who runs the Cross Roads to South Camp route.

“Maybe if it was an inner-city youth, or a taxi man, him wudda get two tickets or maybe charge. Him break the law suh him shudda at least get a ticket. Mi get ticket regular just fi stop and tek up a passenger seh mi obstructing traffic, dangerous driving. And believe mi, mi neva do nothing like that as a taxi man,” he added.

Another taxi operator expressed alarm at the danger that Dietrih knowingly placed other motorists in.

“That was total foolishness what he did, especially with traffic on the road. That’s madness. That could have caused serious problems, that could have taken a life,” he said.

One motorist told THE STAR that he tried apologising to the police once for a less dangerous offence, but it did not work for him.

“Six years ago they took away my van, because my licence expired and the grace period expired,” he said. “And I tried apologising. I even said to the officer, I just started a new job, I had the people dem computer in my van, and I said to him, ‘give me the ticket, please don’t take the van’, but he gave me the ticket and took the van.”

“Once you can get evidence that he was the one in charge of the vehicle and that the vehicle was being driven on the public road in a dangerous manner which exposes other persons to possible injury, then he could have been charged,” he said.

“The fact that he came back on the scene and in the presence of the police is admitting that he was the one who was driving the vehicle and doing all those things, then the police could have invoked the judge’s rule at the same time, and cautioned him. And if he continued to speak about the incident, they could have charged him on that basis for reckless driving,” he said.