ilovejamaicans.com
Home News Call for May 28 to be declared Edward Seaga Day 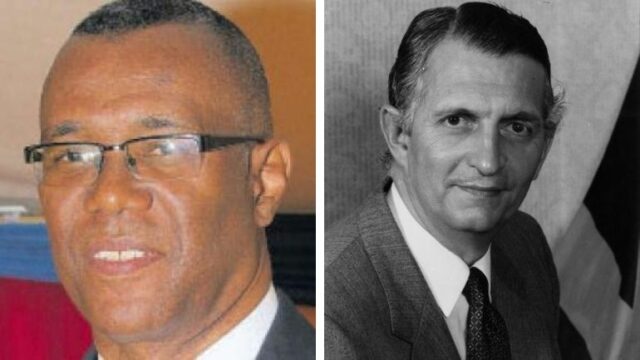 MONTEGO BAY, St James — Jamaica Labour Party (JLP) councilor for the Flanker Division in St James, Senator Charles Sinclair, is proposing that May 28 of each year be declared “Edward Seaga Day“ in the parish, in honor of the memory of the former prime minister.

Sinclair says he intends to table his proposal at the next monthly general meeting of the St James Municipal Corporation, scheduled for Thursday, June 12.

Councillor Sinclair, a former mayor of Montego Bay, is also proposing that the St James Municipal Corporation incorporates May 28 amongst its calendar of events, and develop an appropriate program in honor and recognition of Seaga’s contribution to the economic, political and cultural development of Montego Bay, and the parish of St James in general.

He is suggesting that the Montego Bay Cultural Centre in Sam Sharpe Square be used to host the main event, while schools across the parish can have their own activities reflecting the contribution of Seaga to the parish.

Among the activities, Senator Sinclair is proposing are a symposium, lectures, essay competition in primary and high schools, and a quiz competition.

Sinclair added that it would also be fitting to honor Seaga’s memory on the day with a festival, where persons would be allowed to recite some of his famous speeches and quotes, and to participate in cultural dances, as well as the staging of a debate and panel discussion.

He is also proposing that schools in the parish, especially at the primary and secondary levels, use the day to educate students on Seaga’s contribution to nation building.

“When you look at schools in the United States, students are taught almost everything about their former presidents and leaders, but here in Jamaica, our children know very little about our former prime ministers and their contribution to nation building.

“Much more needs to be done in our schools and the society, by extension, to educate the people on the history of our leaders and their contribution to the country,” Sinclair argued.

He added that it would be a practical move for primary schools to adjust their curriculum to facilitate the teaching of the history of Edward Seaga and other former leaders.

Councillor Sinclair noted that Seaga had resided in Montego Bay in his younger years, and had developed a love for the western city.

He listed the development of the Montego Free Zone and the reclamation of the waterfront lands, among others, as some of Seaga’s significant achievements in Montego Bay during his time as prime minister.

Seaga, the country’s fifth prime minister, died on his 89th birthday on May 28 at a Florida, USA hospital.

He will be laid to rest at National Heroes’ Park on June 23, following an ecumenical service at the Holy Trinity Cathedral in downtown Kingston.