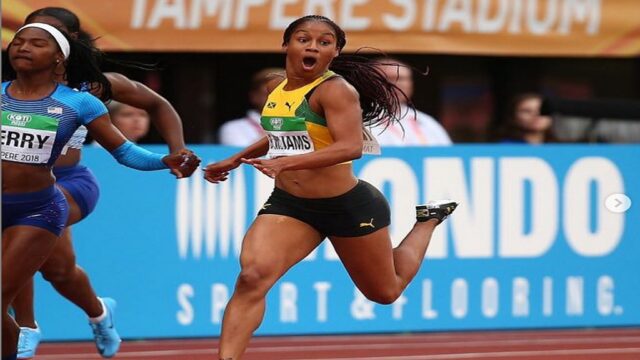 World’s Under-20 double sprint champion Briana Williams has reacted with surprise after her 22.93-second clocking in the women’s 200m at the World Athletics Continental Tour Silver meeting in Miramar, Florida last Saturday.

“I am pretty shocked with my time,” said Williams in a one-on-one interview with NBC sports analyst Ato Boldon, who is also her coach. “My coach said that I was going to run fast, which I did, and I am very happy, and no matter the place, I am just happy to finish a healthy race.”

Williams, who as a 16-year-old captured the 100m and 200m at the 2018 Under-20 World Championship in Tampere, Finland, was running her first 200m race in 22 months.  “It felt new to me, but I will get through gradually step by step,” Williams further told Boldon, who is also a four-time Trinidad and Tobago Olympic medallist. “This is my fastest season opener ever, so I am just grateful and happy to be back competing and looking forward to a great season.

“I am just happy to run with the best of the best. I am pretty happy with the race, and I wished I could have held my form to the end, but we have more work to do in training.”

Williams will next be in action on April 24 in the new Oregon stadium. “I can’t wait to see how I do,” she said.