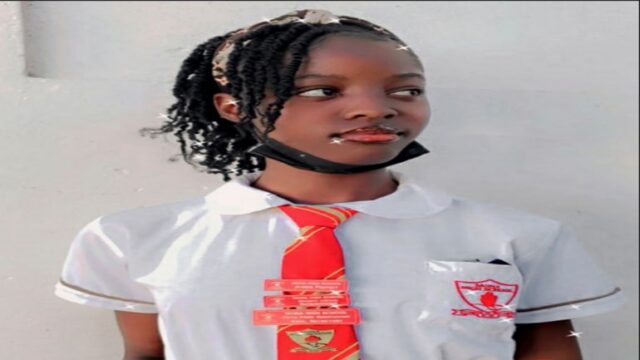 In 2018, a then 15-year-old Renacia Thomas was diagnosed with Wilms’ tumour, a rare kidney cancer that primarily affects children. For two years, the teenager put up a vigorous fight against the disease. In addition to losing her hair from the side effects of the chemotherapy treatment, she was unable to attend classes at Mona High School for a little over a year, as she became severely ill.

Determined to fight for her daughter’s life, Melody Martin sought assistance from the public for the teen’s cancer treatment, and Jamaicans from both home and abroad answered the call.

Wilms’ tumour is a rare kidney cancer that primarily affects children. Also known as nephroblastoma, it’s the most common cancer of the kidneys in children. She required chemotherapy and radiation therapy to kill the cancer cells that were developing in her body. Thomas lost her hair and experienced other terrible side effects of the procedures, and at one point she told her mother that she would rather be stabbed than to undertake another dose of chemotherapy.

Martin said it took a lot of prayers and words of encouragement to convince the embattled teen to continue with the harsh cancer treatments.

“I prayed non-stop and I, along with my co-workers, encouraged her and reminded how strong she is and that God didn’t bring her this far to leave her. He really didn’t because I couldn’t not come up with the $1.5 million to pay for the treatment, but a lot of people helped me. There were strangers who help and doctors who volunteered their time. I am so grateful to everyone because I couldn’t do it alone. It was really rough on her because at one point the cancer stood up in her lungs, even after radiation, but she fought really hard,” the mother said.

On Monday, Thomas, now 18, giggled before stating that she now has a full head of hair, which is quite the contrast to 2019 when she cried uncontrollably when she was asked to remove her wig to show her bald head.

“I have so much now, I can’t even manage,” said the cancer-free Thomas of her hair that has grown back. Her tears have been replaced with smiles, and she is getting ready to sit seven Caribbean Secondary Education Certificate (CSEC) subjects.

“I am preparing myself and I am quite confident that I will be successful. I know I will never or can never forget my cancer experience, but I don’t dwell on it as I am trying to put it behind me and just aim for the stars. I have made the honour roll at my school and I am really proud of myself. I would like to thank everyone who has assisted me along the way,” the Mona High School student said.

The Caribbean Examinations Council administers the CSEC examinations, which will commence on May 23. Thomas, who has intentions to pursue a career in medicine, said she is grabbing every positive opportunity that comes her way.

“I really love the sciences and I love babies and newborns, so I want to be a midwife, even though, when it comes on to blood, I have a weak stomach. But, at the end of the day, I will endure it. Going into medicine is something that I think I am really going to enjoy,” Thomas said.

As she watches her daughter soars academically, Martin said she is elated to watch her daughter take bold strides forward.

“I am so proud of her to see her just going after her dreams. She made the Honour Roll (at Mona High) after everything she has been through. I remember when she was unable to hold a pen, the cancer was tearing her down so bad that the doctors were fearful that it may affect her brain, but it didn’t,” Martin said.

“I am so so proud of her and I get chills over my body when I look at her sometimes. She is 18 now, but she is still my little girl and I just want her to take things slowly. I am protective of her. I love my daughter and there is nothing in this world that could change my love for her,” the mother added.