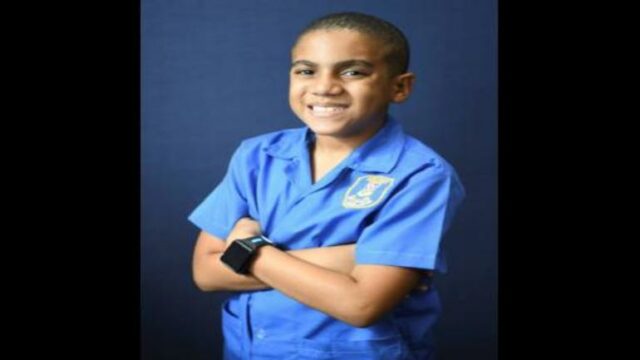 The first time that Josiah DiCarlo talked, he was reciting his ABCs.

“One day I was driving home, and I was singing ‘ Every letter makes a sound’. He didn’t even talk at the time, and I said the ‘A’ says, and I hear him seh, ‘A’. I forgot I was driving. I stopped in the middle of the road and I continued to sing. He went all the way down to ‘M’ and stopped. This was the first I was hearing him talk, I could not believe it,” his mother, Karen Lyons told THE STAR.

Lyons said that since then, her son has continued to excel academically at a rate that’s way beyond his years.

“Teacher gave him homework. She gave him 20 words to do the meanings, and use 10 in sentences. When he said he was finished, I’m like you could not be done writing 10 sentences. He’s like ‘Mommy, the instruction did not say write 10 sentences. The instructions say use 10 words in sentences, so that means I could write one sentence using all 10 words,” she said.

After skipping two grades, eight-year-old Josiah is now in grade five at the Kingsway Kinder Prep and High School.

And last year, when he asked to do some Caribbean Secondary Education Certificate (CSEC) subjects, his mother decided to put him up for the challenge.

“Somewhere in October, I think I gave him a maths, and he did it, and he said to me, ‘No mommy, I can do CSEC, and I was like, ‘huh’?” she said. “I always teach him that nothing is impossible with God, and if I had told him no, he would have asked, Mommy, what about God?”

He received a grade three for EDPEM, and a grade four for biology, after attending classes only one day each week at the high school department at his school.

“When he did the exam, I wasn’t paying it much mind. I collected his results last week. I knew that he didn’t pass human and social biology because he fell asleep in the exam and did not get to do the paper two. I didn’t expect him to pass EDPEM. This is a typing course, documents that he didn’t know about,” she said. “But when I saw the human and social biology results, I could not believe because on it, it said: “Knowledge and comprehension (he got) A”, and that was just paper one,” she said.

Meanwhile, Josiah told THE STAR that the results blew his mind, especially because he did his grade four Primary Exit Profile and end of term exams during the same period.

“It’s very mind-blowing. I want to do IT next year, and do over human and social biology,” he said.

Josiah said that he would like to be an ice pilot when he grows up.