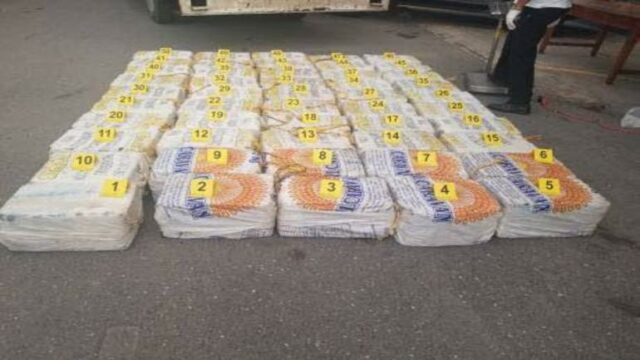 Jamaica is being flooded with approximately 200 illegal guns every month, Minister of National Security Dr Horace Chang has revealed.

According to Chang, members of the criminal network behind yesterday’s massive US$35 million, or J$4.5 billion, cocaine seizure off the coast of St Thomas are among the individuals responsible for importing this kind of firepower.

“Understand, these are the men who bring the guns by the hundreds,” he declared in the House of Representatives yesterday. “We are currently, by my intelligence, getting up to 200 guns coming to Jamaica on a monthly basis. So even when we get a hundred, we not going anywhere.”

Police statistics show that Jamaica has recorded close to 800 murders since the start of the year.

The police confirmed last night that the cocaine, which weighed approximately 1,932 kilograms, was intercepted by members of the Jamaica Defence Force Coast Guard 60 miles southeast of Morant Point during an early-morning operation.

Reports are that 50 bales containing 998 parcels of white substance resembling cocaine were removed from the waters and handed over to the police’s Narcotics Division. No one has been arrested.

Chang, who was closing the Sectoral Debate in Parliament, revealed that the billion-dollar cocaine shipment was delivered to the area by another boat.

“Pictures are available of them, but we couldn’t take [catch] them. Our partners gave us information and our Coast Guard [officers] were to do the interception,” he disclosed.

He lauded the improved capacity of the security forces, which allowed them to confiscate the drugs, before delivering a chilling warning.

“Who we need to catch is not the man who they use to shoot people. [It] is the man who is organising this because what it is telling us, … is that operating around Jamaica now are people who have the capacity to deal with 3,000 pounds of coke,” the security minister said.

“Indeed, Mr Speaker, the more critical issue is that when this kind of thing is operated, we have a serious and clear threat to our society. That is a serious business enterprise and requires the attention of the whole country and the support of the entire country working with the security forces,” he added.

Chang used the incident to tout the Government’s multibillion-dollar capital investment in resources for the police and the military.